From skills to research and technology development.
Written by Aimee Chanthadavong, Contributor on Sept. 10, 2019 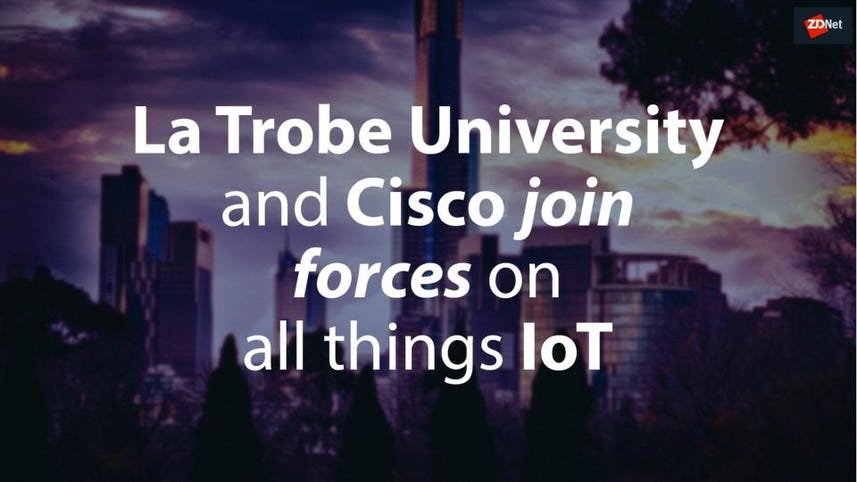 Melbourne's La Trobe University and Cisco have signed an agreement to collaborate on all things related to the Internet of Things (IoT) -- from skills to research, and technology development.

As part of the agreement, Cisco has created a new role, chair of the Internet of Things, who will be responsible for teaching IoT to undergraduates and postgraduates, as well lead research that could inform the development of IoT solutions to solve real-world problems.

While it's unclear who exactly will take up the role, La Trobe said it will be an "internationally acknowledged leader in teaching and research".

Additionally, Cisco will establish a Co-Innovation Centre presence at the university's campus.

Cisco expects the space will serve as a place for researchers, and Victorian-based small-to-medium enterprises and large corporates to develop solutions together in areas such as agriculture technology, smart cities, and IoT.

The establishment of the centre at La Trobe expands Cisco's Co-Innovation Centre footprint. It currently has sites in Sydney and Perth.

The partnership also offers La Trobe access to Cisco's programs such as its Networking Academy modules with IoT, cybersecurity, and entrepreneurship, in addition to access to the company's Digital Schools Network that allow educators and students at participating schools around the world to share resources.

At the time, the company said Sentryo's platform addresses the challenges businesses face when deploying IoT projects, in terms of scaling to production and managing and securing infrastructure. The aim is to merge Sentryo with Cisco's intent-based networking technology, which Cisco has been integrating across its enterprise access portfolio to help customers manage more users and devices.

Earlier this year, Cisco invested AU$20 million in a Sydney-based Webex data centre that will serve some 2.5 million users that are running Cisco Cloud Calling platforms.