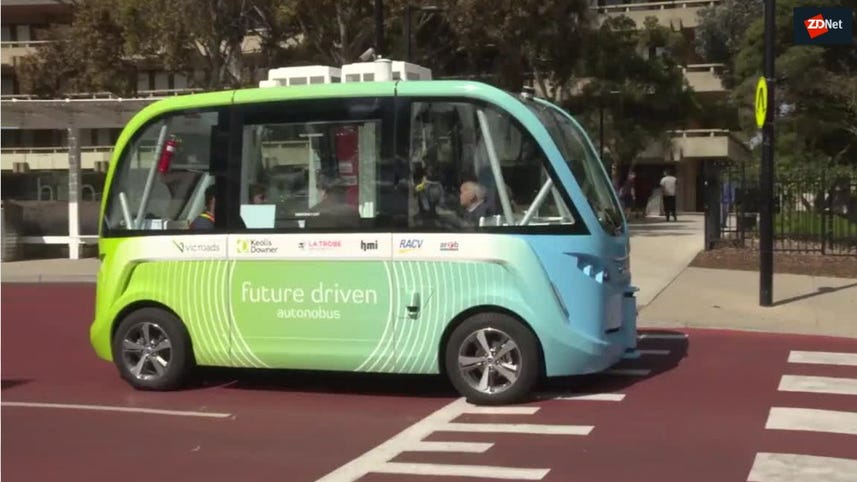 Melbourne's La Trobe University has detailed findings of what it called successful on-campus trials of Navya's driverless "Autonobus" shuttle, which uses 360-degree cameras and sensor systems to detect objects and runs a set route based on map coordinates.

A report on the trial by La Trobe and its project partners includes a number of recommendations, including further trials of the technology; considering autonomous vehicles in future infrastructure planning and investment decisions; and education and engagement of communities on autonomous vehicles.

The Autonobus -- which drove students around La Trobe's Bundoora campus as part of a trial until July -- passed every test it went through, including safety, technical, operational, and passenger testing on a pre-programmed route, and interacting with pedestrians, cars, buses, and cyclists, according to Dean Zabrieszach, CEO of project partner HMI Technologies.

"No other trial in Australia has tested an autonomous vehicle of this type in such a dense urban location," Zabrieszach said. "We have demonstrated that it can be done safely, without incident, and in compliance with road safety laws."

Zabrieszach added that the Autonobus is now ready for deployment in other similar environments with high activity but with a "controlled set of circumstances".

David Franks, CEO of public transport joint venture Keolis Downer, said the trial demonstrated that technical, operational, and community requirements could be met for successful deployment, but as an additional service to existing publish transport down under.

"The pilot project provided strong evidence autonomous buses present a significant opportunity in the short term to meet existing mobility needs and encourage more people on to public transport and across Australia," he said.

"All levels of governments and the private sector must work together to ensure we have the right infrastructure and regulatory systems in place to facilitate the deployment of autonomous vehicles and ensure they are integrated into the planning process for transport and urban developments."

La Trobe's report also included feedback from the 517 Autonobus passengers both before and after boarding the shuttle. According to director of La Trobe's Centre for Technology Infusion professor Ani Dessai, 90 percent of all the passengers said they could see themselves riding on driverless buses in the future after experiencing the technology, and would be willing to pay a "fair price" for such a service.

The trial, touted as the first of its kind in Victoria, brought together VicRoads, Australian Road Research Board, Keolis Downer, HMI Technologies, and the Royal Automobile Club of Victoria, with the aim of gaining a better understanding of the technology and how to integrate it with existing public transport systems.

La Trobe said the Autonobus operates on a set route based on specific map coordinates, like "a tram running on set tracks". It can run on both an on-demand system, which involves passengers calling it to a stop "like an elevator", or on a set timetable, where it picks up passengers at multiple designated stops.

"The Autonobus is so precise that it will run on the same part of the road every journey," La Trobe said. "Roundabouts and complex traffic intersections can also be managed thanks to the advanced technology which enables the Autonobus to integrate with conventional roads."

Also in Victoria, Transurban is currently conducting a driverless vehicle trial in Melbourne over the course of 18 months, which will monitor how the vehicles interact with real-life road conditions such as overhead lane signals, electronic speed signs, and line markings.

In Western Australia, Perth was chosen as one of three cities to host a trial of Navya's electric, driverless fleet, run by the Royal Automobile Club (RAC) of Western Australia and the WA government.

The vehicles will be bookable through a smartphone app once rolled out, according to RAC WA, similar to ride-sharing services such as Uber.

The WA government said at the time that future benefits of driverless vehicles include increased efficiency, safety, reduced transportation costs, and employment opportunities.

Australia's National Transport Commission announced the drafting of a new national law to support the testing and development of autonomous transport in May.

The state government has chosen Coffs Harbour and Armidale for the next test beds of its driverless shuttle.

Introduced by ACMA, the new regulations will enable the roll out of intelligent transport systems by Australian road traffic authorities.

Dossier: The leaders in self-driving cars

While a number of companies are entering the autonomous vehicle space, these 10 are making the most progress in advancing the technology.