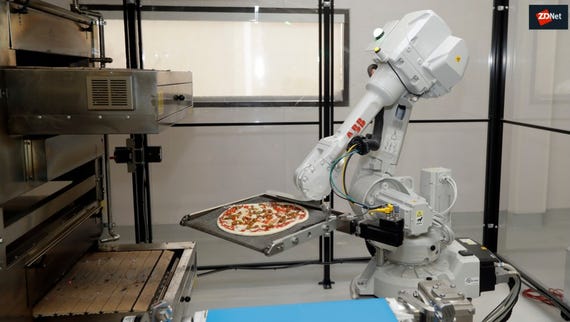 Our first inkling something was up came when Domino's started delivering hot pies via autonomous vehicle in limited markets.

We watched the success of Zume Pizza, a California-based chain that uses robots, big data, and custom trucks to whip up pizzas on the way to your door. We figured it was just a Silicon Valley fluke.

Not to be outdone, Domino's added a delivery drone to its growing lineup of concept delivery vehicles.

Even NASA (well, a startup that grew out of a NASA project) is 3D-printing space pizzas.

And just this week, Little Caesars, the low-cost standby for emergency pepperoni, was issued a patent for a pizza assembly robot. The Spoon unearthed the new filing.

The centerpiece of the machine is an articulated robotic arm, much like the ABB-supplied arms used by Zume. In Little Caesars' patent schematics, the robotic arm is meant to lift a dough tray and move it around, working in concert with mechanisms that spread sauce, cheese, and toppings. The arm then places the pie in the oven.

And so continues the march toward a lights out pizzeria. It's a trend that's happening across the fast food industry.

McDonald's is already using AI and check-out kiosks to reallocate staff to other tasks, and despite a recent setback, Flippy, the burger flipping robot, will soon be back on the job at CaliBurger.

The coming shift is perhaps predictable. Fast food restaurants are organized like mini-factories, with discreet tasks distributed across an assembly line.

Low wages in the industry (there are a few exceptions, most notably In-N-Out) and relatively high prices for collaborative robots, the kind that can operate around people without cages, worked to stave off automation for a spell.

But prices for robots have been falling quickly as adoption heats up. Fast food workers, meanwhile, have been vocally advocating for higher wages and benefits, leading to industry concerns over growing unionization and rising minimum wages.

And then there's the most ignored reason fast food restaurants are leaping into automation: People like me write about it when it happens. (And people like you read the articles.)

We're at a point in our social evolution where technology is fetishized. For all the chains mentioned above, introducing new technology has led to publicity and, arguably, heightened brand image.

Little Caesars hasn't announced any immediate plans to kick humans out of its kitchens. But across the industry, it's safe to say the writing's on the wall.