By Natalie Gagliordi for Between the Lines | February 27, 2018 | Topic: E-Commerce 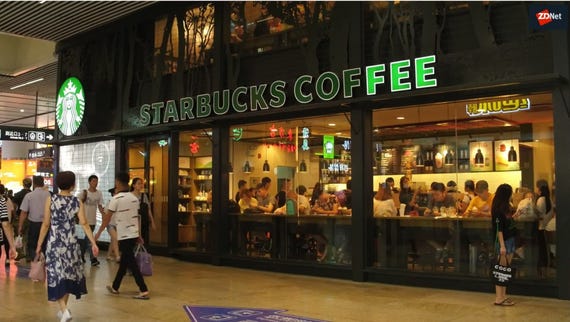 Next, Amazon will come for Starbucks
Watch Now

Video: Next, Amazon will come for Starbucks

The Cincinnati-based retailer said it had Q4 earnings of $2.82 a share on revenue of $8.67 billion, up 1.8 percent. Analysts had expected profit of $2.71 a share and revenue of $8.68 billion. Shares of Macy's were up as much as 9 percent following the report.

Sales at Macy's stores open more than 12 months, including in departments licensed to third parties, climbed 1.4 percent over the quarter, topping analyst estimates for a 0.31-percent increase.

Read also: Here comes the future of retail (again) brought to you by tech vendors

"We are encouraged to see a trend improvement in our brick & mortar business, and we had the 34th consecutive quarter of double-digit growth in our digital business," said Macy's CEO Jeff Gennette.

Macy's said it plans to spend $1.05 billion on capital expenditures this year to bolster its stores and e-commerce strategy. The retailer is also finding ways to capitalize on its remaining real estate assets to strengthen its e-commerce business. Over the past three years Macy's has brought in $1.3 billion by shedding underperforming stores, and selling unused warehouses and parking garages.

In February, Macy's signed an agreement to sell seven floors in its Chicago flagship to a private real estate fund sponsored by Brookfield Asset Management. Brookfield plans to convert the unused floors into office space, while Macy's expects to rake in $30 million as part of the transaction.

Gannette also stressed the importance of the company's loyalty program, which is a key element of Macy's turnaround effort called the "North Star" strategy. In a nutshell, Macy's is trying to target its best customers with exclusive loyalty perks.

"In 2017, we tested and iterated a number of merchandising and strategic initiatives as part of our North Star Strategy," Gannette said. "These initiatives contributed to our fourth quarter performance, and in 2018 we are ready to scale as well as test additional revenue-driving initiatives. We are also encouraged by customer response to our new Star Rewards loyalty program."

Looking ahead, Macy's said it will invest strategically to accelerate the rollout of a number of near-term growth initiatives that will impact stores, technology and merchandising.

In the meantime, the retailer is relying on tighter inventory management to preserve profit margins and growth in its loyalty program to lift sales in the coming quarters. To fuel more gains in digital, Macy's has improved search engine optimization and shifted more media spend to online channels.

Like other department store chains with deep brick-and-mortar roots, Macy's has felt the sting of the so-called Amazon Effect and struggled to evolve as an e-commerce player. Amazon is eating up sales of apparel, home goods, and other staple items of the traditional department store, leaving brands like Macy's scrambling to lure back shoppers.

Macy's previously announced plans to close around 100 stores last August in order to focus spending on its highest-growth-potential locations and new digital tech.

The retailer on Thursday said it's working to align its in-store and online shopping experiences by allocating more funds to its digital businesses and ongoing stores.