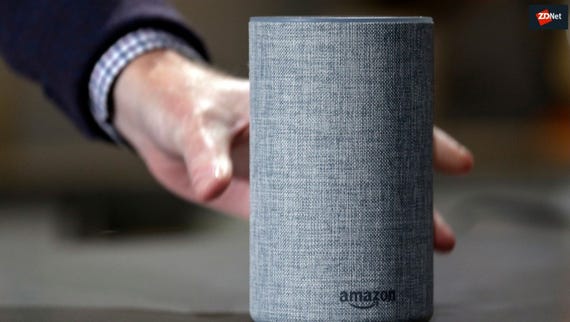 Does Amazon need its own Alexa smartphone?
Watch Now

At a surprise event in Seattle, Amazon announced updates to a few Echo-branded devices and unveiled what seems like a dozen entirely new Alexa products.

From a new microwave to a wall clock (not joking), Amazon introduced basically everything but the kitchen sink during its event. Almost all these new devices come with built-in Alexa voice control, or they are designed to work with both existing and new Echo products.

Confused about the myriad of announcements? No worries. We've delved into all the details and have rounded up what matters most: Prices, features, and release dates. Enjoy!

The updates include the voice-controlled Echo Dot, Echo Show, and Echo Plus, all three of which now come with sound improvements, though the new Echo Dot also comes with a redesign.

The original, hockey puck-sized model launched in 2016 as a simple way to add Alexa to external speakers. But it had a tinny speaker hardly suitable for proper music playback. The new one not only looks different but is supposed to provide a more "full sound," though you can still pump tunes via your own speakers over Bluetooth or with a 3.5 mm audio cable.

As for the new Echo Show, it's being marketed by Amazon as "all-new" -- complete with "new speakers," a "new 10-inch HD screen," and a "new fabric design." Apart from the new cloth look, it primarily comes with more powerful stereo sound, thanks to dual 2-inch drivers, a passive bass radiator, and Dolby processing. It also has eight microphones with far-field technology, which means Alexa should be able to hear you even while music is playing, according to Amazon.

Also: How to pick the right Amazon Echo device CNET

The new model is compatible with Zigbee devices and doesn't need a separate hub. Amazon noted you can use it to view security camera feeds with two-way audio and get notifications (this this feature will be "coming soon"). The Alexa app is even adding Skype support.

The last product update Amazon rolled out concerns the Echo Plus, which, like the others, is supposed to bring an improved sound experience. It has more premium speakers that are "powered by Dolby play 360-degree audio with crisp vocals and dynamic bass response," Amazon said. You can also adjust the speaker's equaliser settings within the Alexa app.

The new Echo Plus modelfurther sports a built-in temperature sensor, as well as a built-in Zigbee hub, making it easier to set up and voice control your compatible Zigbee smart home devices, such as smart lights and plugs, without a separate hub.

Amazon owns security camera company Ring, so it announced a new version of the Ring Stick Up Cam. There are two new versions, technically, a wired model and a battery-powered one. The wired version has an Ethernet port and will be available in black and white. Both can work either indoors or outside, as they have an IPX5 waterproof rating, and they record 1080p video.

In terms of new devices, the new Echo Input can plug it into any existing speaker to turn it into an Echo. It's like an Echo Dot with far-field microphones and no speaker. You can plug it into or pair with another speaker in order to add Alexa intelligence to your home audio equipment. It's similar to Google's Chromecast Audio, but this has mics and Alexa.

Amazon has announced an all-new, cloth-covered Echo Sub. It has a 6-inch, down-firing woofer that delivers 100W deep bass sound. You use the Alexa app to pair it to an Echo or Echo Plus (sold separately) to achieve more "dynamic music that fills the room," or a left/right stereo sound experience. It's supposed to be simple to set up and use, too. Just plug it in, open the Alexa app, wirelessly connect to your Echo devices, and control your music by voice.

Amazon announced two more audio products: the Echo Link Amp, which will connect to a receiver or an amplifier, and the Echo Link, which enables your Echo to pipe music to your stereo system. These are stereo amplifiers with multiple audio ins and audio outs and support Ethernet and coaxial cables, and the Link Amp features a built-in 60 watt dual-channel amplifier. They'll work with other Echo devices but do not have built-in Alexa voice capabilities.

Amazon also rolled out the all-new Amazon Smart Plug, which adds Alexa voice control to any electrical socket. It primarily lets you schedule times to turn appliances on and off, use Alexa for voice control, and control devices when you're away from home. Just plug it in, head into the Alexa app, add your new Smart Plug, and start using Alexa voice commands -- no smart home hub required. You can also set up routines and schedules through the Alexa App.

Not done yet, Amazon has a new Echo accessory that works with Alexa-enabled devices to display timers you've set with Alexa. The new Amazon Echo Wall Clock has no mics, but it does have a ring of LEDs that show your active timers. You'll see an LED for how long a timer is set, and if you add a second timer, and you'll see a second LED.

It will auto-change the time for Daylight Savings Time, as well.

Just when you thought Amazon was finished, it brings out a microwave with built-in Alexa and an integrated Dash replenishment service. That's right. You can order a replenishment, such as popcorn, with the "built-in Ask Alexa button". You can also control the company's new microwave using voice commands, naturally. So, if you say, "Alexa, one potato," it'll turn on with a timer. You can then ask Alexa to add more time or stop, all by voice.

FireTV Recast is a DVR device that can stream shows from an antenna to your home, so you can watch over-the-air television. You just place the box in your home, and you can start streaming on your Echo Show, Echo Spot, Amazon Fire TV, or on mobile. You can watch local news and channels. It'll also send live TV recording to your Echo Show (four shows at a time, for streaming on multiple devices). You can delete or schedule recordings with Alexa voice commands.

Last, but not least, is an in-car accessory that mounts to your dashboard and lets you integrate Alexa into your car. It comes with an eight-mic array and connects to your car through either Bluetooth, Bluetooth LE, or a 3.5mm aux jack. It runs on a new Real Time OS from Amazon and uses your phone connectivity and to display in-car navigation through Google Maps.

The Echo Auto will cost $49.99, after an initial discounted invite price of $24.99. It's expected to start shipping for select invited users sometime later this year. Request an invite here.

Why Amazon's Alexa Skill Blueprints are a master stroke

Amazon has opened up Alexa to the masses with Alexa Skill Blueprints and integrated the digital assistant even more with families. Here's why these Alexa code-free templates make good business sense.