By Larry Dignan for Between the Lines | October 14, 2021 | Topic: Enterprise Software

Microsoft is king of the software audit with Oracle a distant second, according to a report by Flexera.

Flexera's 2022 State of ITAM Report found that 46% of respondents were audited by Microsoft for usage in the last three years with 30% citing Oracle. Software asset teams are spending most of their time focused on Microsoft followed by VMware, Adobe and Oracle.

Indeed, 24% of respondents paid more than $1 million in true-up costs over the past three years due to software audits. The survey is based on responses from 465 technical professionals at global companies with at least 1,000 employees.

Software audits are conducted by third parties for vendors tracking application usage, the number of licenses and contracts to find violations in terms. Customers typically cringe at software audits, but vendors see the practice as a check on what's actually used and consumed versus what you agreed to license.

Flexera also found that respondents were focused on software audits at the expense of SaaS and cloud spending. Respondents estimated that 29% of SaaS software spend was wasted and less than half of them aim to optimize subscription levels.

Most IT asset management practitioners use a configuration management database and feed information into ServiceNow with BMC No. 2.

Here's a look at what products are being actively managed by software asset management teams. 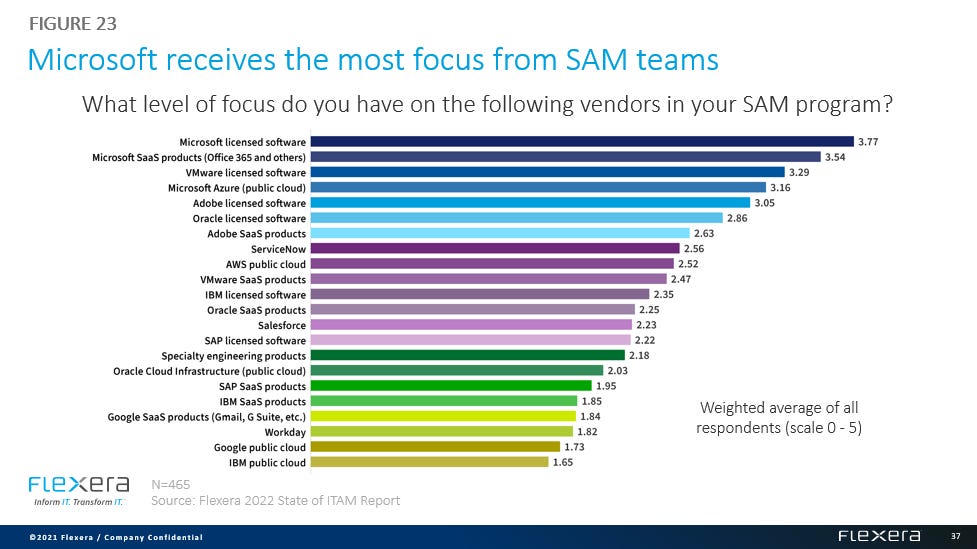 By Larry Dignan for Between the Lines | October 14, 2021 | Topic: Enterprise Software