Microsoft's first tablet needs to do several things. It needs to push the state of the art, to encourage OEMs to develop better hardware, and it needs to showcase Windows 8.
Written by First Take , Previews blog log-in on June 18, 2012

Microsoft's first tablet needs to do several things. It needs to push the state of the art, to encourage OEMs to develop better hardware, and it needs to showcase Windows 8. It needs to show what can be done with ARM and with Intel processors, in the home and in the office. It also needs to be a PC, not just another tablet device. That's a tough challenge, and one that's going to be hard for a software company.

We managed a short hands-on with the ARM-based Surface at the launch event in Los Angeles, as well as getting a look at some of the components Microsoft has built into its first devices. First impressions are good. The tablet is light, with a good clear 16:9 10.6in. screen. While Microsoft hasn't revealed full specifications of the ClearType-branded screen, at a HD resolution it's likely to be a 1,366-by-768-pixel 720P display (the Surface Pro will have a full HD display, which we expect to be 1080P). There's a USB port for devices, and an HDMI connection for larger screens and projectors. Microsoft wasn't ready to let us spend much time with the Surface, but we were able to get some quick first impressions. 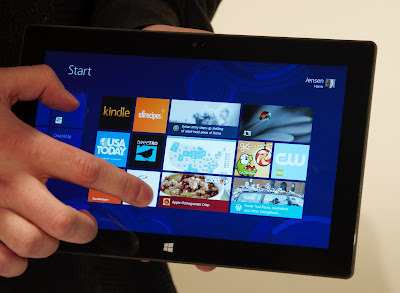 A Surface at work

Perhaps the first impression is just how light it is, and how comfortable it feels. The chamfered sides fit neatly into the hand. The VaporMG magnesium alloy case is rigid, with very little torsion, and the Gorilla Glass 2.0 display lets the fingers glide over the touchscreen. This was our first hands-on with Windows RT, the ARM version of Windows 8, and although we only used a couple of Metro style applications, they were responsive and performed much like their x86 equivalents — something that bodes well for the release of Windows RT later in the year. The touchscreen worked smoothly, as did the capacitive Windows key in the bezel. 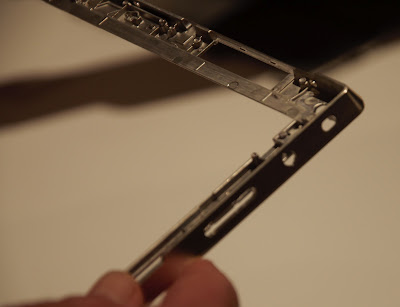 The magnesium frame of the Surface

The 10.6in. HD display means that the Surface is a device that's going to work best in landscape mode. Metro-style applications don't work well in portrait mode. Landscape also makes sense for watching movies, and there's a flip-out stand that'll let you watch content without having to hold the tablet all the time. The stand is surprisingly rigid for something so thin, and the 'thunk' as it snaps back into place is reassuringly solid. Microsoft told us that it was meant to resemble the sound of an expensive car door closing… 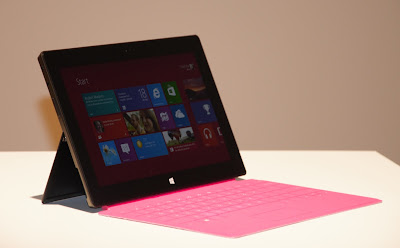 Keyboard and Surface together

The most innovative feature of the Surface are the two keyboard covers. Both work with either the ARM or x86 versions of the hardware, and have magnetic connectors that both secure the covers and make them easy to fit. If you're using the coloured TouchCover the Metro theme will change colour to match. The TouchCover builds on Microsoft's work on capacitive sensor keyboards, and is pressure sensitive — so won't respond to random touches or a hand resting on the keys. There's also an integral trackpad, although Microsoft wouldn't tell us if it would support Windows 8's trackpad gestures. We weren't able to try out typing with the TouchCover, but we did get a chance to try out the more traditional TypeCover, with switch-based keys. Microsoft has given both keyboards a soft fleece-style feel that makes it easier to grip the tablet and less likely to slip on a desk. 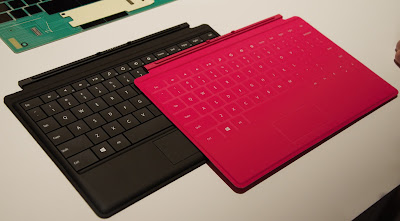 Microsoft is proud of its VaporMG production process for the case, which uses injection moulding techniques to deliver surprisingly high tolerances. We got to inspect some sample case components, and saw a vapor-deposition-treated rear panel. The components are light and extremely rigid — so light that we suspect that the screen and the battery count for much of the Surface's weight. 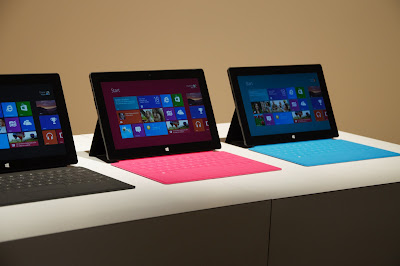 Surfaces of all different colours — thanks to their keyboards

This, then, is Microsoft's shot across the bows of the PC hardware industry. Surface is giving it fair warning: if PC OEMs don't deliver high-quality hardware that takes full advantage of Windows 8's capabilities, then Microsoft will do it for them. With distribution limited to Microsoft's online and physical stores, this isn't going to be a billion-dollar business — yet. However, Surface sets a high bar for the PC industry, and it's up to the OEMs to jump. Until then, if you're looking for a Windows 8 PC, then Surface is going to be very high on your shopping list — even if it means hopping on a plane to the US.