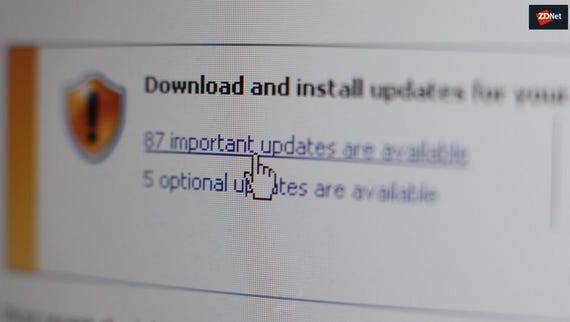 Microsoft has a new answer to automatically downloaded Windows 10 updates that aren't compatible with the device they're installed on: Windows 10 can now remove "problematic updates" without requiring user interaction.

The feature aims to address updates with more severe incompatibility issues, specifically ones that prevent a Windows 10 PC from starting up.

If a Windows 10 machine experiences a startup failure after installing certain updates, the device will display the notification: "We removed some recently installed updates to recover your device from a startup failure."

When Windows 10 detects such an event, the operating system will attempt to address the failure by uninstalling recently installed updates.

The action is a last resort that will only be taken when all other automatic recovery attempts have failed to work, according to Microsoft's support note.

The types of updates that it may automatically remove if it triggers a startup failure include device drivers, hotfixes, updated system files, service packs, and new Windows features.

Microsoft will also block problematic updates from installing for 30 days in the event Windows detects that an update has caused a startup failure.

"This will give Microsoft and our partners the opportunity to investigate the failure and fix any issues. After 30 days, Windows will again try to install the updates," Microsoft notes.

Microsoft has provided links to pages describing how to manually install drivers and quality updates if the user believes the removed updates shouldn't have been uninstalled.

It also urges Windows fans to help it diagnose and remediate buggy updates by submitting reports through the Windows 10 Feedback Hub app.

The auto-uninstall feature is one more way Microsoft is trying to help Windows 10 users avoid a bad experience with its operating system and comes as it attempts to lift the quality of updates and ensure that it doesn't miss reports from Windows Insider testers.

The company implemented multiple blocks to prevent devices with specific software from receiving the Windows 10 version 1809 update. Microsoft generally aims for rapid adoption of the latest version of Windows 10, but it put the brakes on version 1809's release after it discovered the update deleted users' files and that multiple Windows Insider testers had reported the issue during the preview phase.

Microsoft has also placed greater emphasis on the 'Windows 10 update history page'", recently urging all IT pros, admins, and average users to bookmark the page, so they can stay informed of the latest issues affecting the rollout.

The page is part of Microsoft's effort to improve the transparency of its decision-making in response to the data-deletion bug, which caused many Windows fans to question whether the company was adequately testing updates before releasing them to the public.

To this end, Microsoft last week explained how its data-science team treats the diagnostics data it receives from its own engineers and millions of Windows 10 users around the world.

It also flagged that it is working to improve responsiveness to user feedback so that it can identify gaps in its data-based approach to fixing Windows.

Microsoft: To ensure Windows 10 update quality, these are the tools we use

Microsoft offers Windows 10 users a look at how they use data to improve the quality of Windows 10 updates.

Microsoft released the Windows 10 October 2018 Update on October 2, then pulled it days later. Now, with November fast approaching, the update has still not been re-released. Where's the problem? And will it happen again?

Microsoft's latest update for Windows 10 users has been causing "massive lag spikes" in some games.

When Microsoft began testing its Windows 10 20H1 release more than a year before it is expected to start rolling out, many company watchers wondered why. The answer may be more boring -- and a lot more complicated -- than you'd think.

Microsoft has hit pause on part of its Windows 10 Insider preview program due to a green screen of death glitch that it can't fix.

How annoying are Windows 10's automatic updates? In a new study, a group of UK researchers report that users of Home edition experience unexpected restarts and inconsistent installation times, caused by inappropriate defaults and inadequate notice of pending updates.