With recent articles showing a lack of adoption for asking Alexa to buy things, many folks are saying voice shopping may be dead before it even gets going, but reports of voice shopping's demise may be a bit premature
Written by Brent Leary, Contributor on Aug. 14, 2018 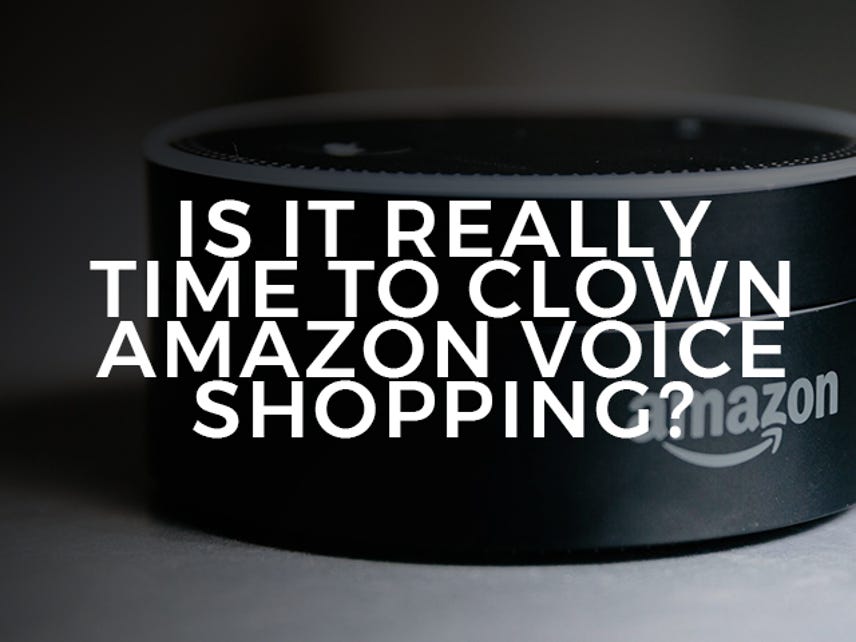 For my July 2017 CRM magazine column, I wrote about why I thought it was time for small businesses to pay attention to the potential of voice-first devices to impact customer engagement. And, at the time (I wrote the article in May of that year), I found research firm RBC estimated that by 2020:

At the time, I thought those are some big numbers, especially that $5 billion in voice sales by 2020. But, a few months later, that $5 billion estimate doubled, and later in the year, that number doubled. And, by the early part of this year, some estimates had that number now ballooning to $40 billion by 2022 -- as estimated by OC&C Strategy Consultants.

Also: Voice and the next generation of CRM adoption

I admit I drank the Kool-Aid and bought into these estimates to the point where I was looking for signs of proof in the Prime Day results press release. And, to my chagrin, not even a mention of voice sales were included, which led me (and a whole bunch of other folks) to believe that nothing of any significance came by way of Alexa in terms of sales. And, according to a recent article from The Information, there isn't much going on in general when it comes to voice shopping.

According to article, which cited two folks briefed on Amazon's internal figures:

So, when this article came out, coupled with the sound of silence from Amazon on Prime Day voice sales numbers, the clowning of Alexa and voice shopping came fast and furious. The "told you so's" that nobody would trust voice-first devices to shop for anything other than cheap items -- if any items at all -- came with some serious bite to them. Almost as if Amazon had predicted the $40 billion-dollar number personally. It didn't. And as it's done in the past, Amazon hasn't given us any numbers directly to really know how much (or little) revenue is flowing through Alexa. More importantly, it hasn't actually said how important and/or urgent voice shopping is to its future revenue growth. So, while some may feel like it's game over for Alexa and voice shopping in general, to me it feels a bit premature to make that call for a few reasons.

OC&S estimates that the total voice sales market today is about $2 billion, which is about 1 percent of the $200 billion in revenue Amazon is expected to make in 2018. And while the company is responsible for about half of all online sales in the US, online sales still makes up about 13 percent to 14 percent of all US retail sales. So, with the acquisition of Whole Foods and some other bricks and mortar initiatives going on, it feels like getting more of the overall retail sales pie is higher up the priority list than voice shopping is currently. You can also say expanding into other countries to get more of the international online sales pie may be higher up on the totem pole. Because there may be fewer hurdles to clear and more/easier/quicker convertible revenue opportunities right now in these areas than focusing on knocking down barriers to large scale voice shopping. But just because other things appear to be more pressing, that doesn't mean voice shopping isn't a substantial opportunity somewhere down the line.

More smart screens heading to a household near you

It seems like the past couple of years the Echo Dot has been among the top-selling products people bought on the big shopping holidays on Amazon. But one of the takeaways from Prime Day 2018 was that it was the "biggest event for Echo devices with screens (Show and Spot)", according to the official press release. This is significant because visualization may help spur on more confidence in folks using their voice to shop.

There are some kinds of sales that it may be easier to transition to voice shopping, like when you're reordering something -- or if you know specifically what it is you want. But in those other circumstances, where you don't exactly know what it is you want and/or need, voice shopping isn't as straightforward right now. And, in those cases, having visual cues to help analyze and process decisions add a level of insurance needed to feel confident about pulling the trigger. So, while the Dot has been the best-selling Echo device (mostly due to its cheaper price tag), the Show and Spot may be the most important Echo devices from a shopping perspective. And Echos with screens have been on the market just a bit over a year at this point -- with the less-expensive Spot only being available since early this year. So more of these particular devices should increase the level of voice shopping taking place, and Amazon's willingness to deeply discount these particular devices to get them into more homes is a strategy I expect it to repeat often heading into the holiday season. And with Google coming out with a smart speaker device with a screen, the acceleration of these kinds of devices into household should definitely pick up.

Clearing the path for voice shopping at scale takes time

Speaking just for myself, I admit I bought into the hype about $40 billion in voice shopping by 2022. It may happen, or it may not. But does Amazon really need it to happen by then in order to be successful? I don't think so. We already know they have a massive lead in online sales. We also know that more than half of all product searches start on Amazon.com. Now that's a killer combination, and in the near term, I don't think we'll see significant changes to either of those situations, which makes it less of an imperative to purposely disrupt the status quo. But in order to make voice shopping really make sense at scale, product search and discovery, which is currently oriented to a type/click world resulting in pages of link lists, has to work differently than it does today to make it more appealing. And that includes a different approach to experience design for voice. Recommendations and reviews may have to be presented differently in order to provide the information in a more voice-friendly manner -- as getting a bunch of search results read back to you by Alexa just isn't gonna get it done, in my opinion.

So, there is a fair amount of work that has to take place to make voice shopping more attractive, and right now it may not be as important to folks already in the lead. But the key phrase in there is "right now."

Too soon too last laugh

Based on what we know today, I think those of us who bought into the "voice shopping era" probably deserve a to be laughed at some. I think we read too much into the early and unexpected success of smart speakers. And part of the reason Echo and Alexa, and the other smart speakers, have been viewed as successes is because nobody saw them coming. There were no expectations on them as they entered the market because most of us didn't know what the heck they were. But now that we do know, and because "tens of millions" of these devices have been sold, expectations are high and growing higher for how they can and will impact different facets of our lives. And that includes shopping with our voices.

But when it comes to shopping, I'm guessing -- for the meantime -- both consumers and the major players aren't feeling a real urgency to make this happen. There are other pieces to the puzzle that seem to be taking precedence. In Amazon's case, it has a few areas of the business, like AWS, that are growing rapidly, while also facing big competition. Piper Jaffrey just came out with an estimate that Amazon's ad revenue could hit $16 billion by 2020 and could eventually surpass AWS in revenue. And, of course, selling more Echo devices -- particularly those with screens -- is important but facing increased competition, particularly from Google.

Aligning education with motivation... at some point

With all that said, I don't think now is the time go into full belly laugh mode on voice shopping just yet. Because I do think some of those things that are higher up on the to do list will actually help make voice shopping hit the mainstream a little further down the road. And as those things come off the list -- or are at least under control enough to move down to DEFCON 5 -- more focus will probably turn to voice shopping, as it will be seen as possibly removing friction to the shopping process. And I expect more focus to go to educating consumers on why voice shopping is safe and convenient. I mean we all know this was done in the mid 90s when people said they'd never trust giving their credit card number to a website to buy a book.

While that trust didn't happen overnight, and despite all the legitimate security concerns that existed, it happened; and now pretty much all of us give up the credit card digits without giving it a second thought. And Amazon paved the way for that to happen. So, even with all the current legitimate security concerns surrounding voice shopping, you have to think that in the long run they can be addressed and answered as they were in the past. And, Amazon especially, has the means to combine that ability to insure and educate with motivation -- meaning the ability to provide specific "Alexa deals" to voice shop. And to make those deals personalized at the individual level could increase the level of voice shopping on its own as even more Echo devices (with screens) enter households.

So, while voice shopping may be off to an inauspicious start -- partly due to expectations foisted upon by folks like me who got caught up in the Alexa frenzy -- I wouldn't close the book on it just yet. Hey, I don't know if it will lead to more sales in general, or increasing the percentage of overall sales coming through digital channels... or if it will just make it easier to reorder stuff that we'd have reordered some other way in the past. But even if it doesn't totally disrupt the current status quo, I think voice shopping will at least become significant enough to pay attention to.

It will be interesting to see over the next couple of years how things shake out, as voice shopping has the potential to move up the list of importance as time goes on. And if a new player comes out of nowhere to change the game in such a way to cause the big boys to speed up their efforts, then those laughing now might not be the ones laughing later.

Check out the embedded video above for a discussion on this topic between me and my Watching Amazon partner John Lawson. Yeah, we get a bit animated on this one.

We found out that Prime Day was Amazon's biggest sales day ever, and millions of Echo devices were sold. But we didn't find out if voice shopping reached an inflection point on the way to going mainstream.