Motorola launched its latest Edge 5G smartphone in a move that aims to broaden its reach, round out its mid-priced premium lineup and make headway into business.

Doug Michau, executive director of North America Business Development at Motorola Mobility, said Motorola has gained market share as a number of Android players such as Huawei, ZTE, LG and HTE have dropped from the market in US. Michau put Motorola's market share at 10% in North America, or No. 3, with the top spot in the retail unlocked market.

The latest Edge plays to that performance/value motif with a 108MP Ultra Pixel camera, a display with a refresh rate of 144Mhz, a 5000mAh battery and Qualcomm 778G processor. Motorola has also been adding business features such as Lenovo's ThinkShield security system to devices.

On Lenovo's fiscal first quarter earnings conference call, CFO Wai Ming Wong smartphone sales were up 64% from a year ago. Lenovo has branded smartphones in China, but Motorola is the lead brand in much of the world. Wong said smartphone profits in the quarter was $85 million with operating margin of 4.9% with market share gains across all geographical markets.

"We will continue to increase ASP (average selling price) through investing in innovation and driving favorable premium mix," said Wong. "This will contribute to healthy growth."

Key points about the Moto Edge

Like previous devices from Motorola, the company has been working diligently to improve its camera systems and develop features such as Macro Vision. Chris Francica, head of global product marketing at Motorola Mobility, said the company looks at anonymized data from devices as well as feedback from customers to add camera improvements. The combination of quantified and qualitative data gives Motorola insights on "what camera features are being used most."

While Moto Edge is an option for consumers who like to buy unlocked devices without spending too much, Motorola and parent Lenovo are also going for businesses.

Features like Ready For, ThinkShield and the ability to sell PCs from Lenovo and devices from Motorola as a bundle are likely to appeal to enterprises. In the Android space, Motorola is competing with Samsung, a B2B giant, across multiple prices points the company can be a viable option for companies.

Depending on requirements and industry, Motorola is aiming to be an option for frontline workers and industrial use cases. Motorola hasn't gone the rugged route for its devices, but its smartphones can be used across multiple areas.

Motorola has 47 devices in the Android Enterprise Recommended program for knowledge workers including the previous version of the Moto Edge. 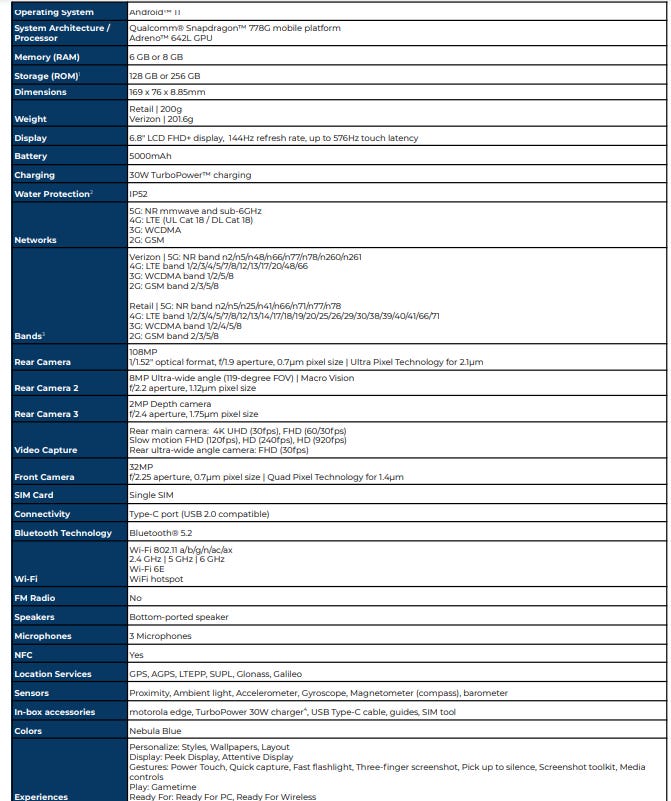