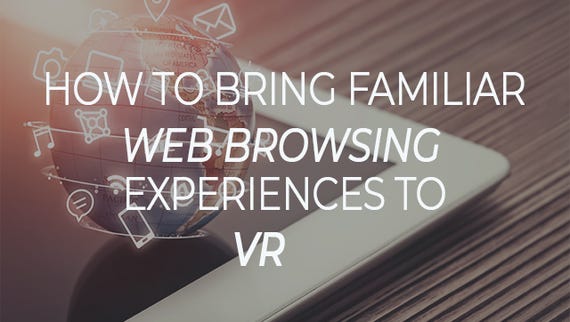 Mozilla on Tuesday released version 1.0 of Firefox Reality, a web browser built expressly to work with standalone virtual reality and augmented reality headsets. The browser is now available in the Viveport, Oculus, and Daydream app stores.

Firefox Reality enables users to move between 2D websites and immersive web experiences. As Mozilla said when it announced its work on the browser in April, the browser is open source, enabling manufacturers to add the browser to their platforms. The first release answers some of the questions about what browsing the web in VR should look like, according to Mozilla.

"A desktop is a familiar experience," Dan Brown, marketing lead for emerging technologies at Mozilla, said to ZDNet. By comparison, "when you put on a [VR] headset and you're completely immersed, everything's different."

For instance, traditional web browsing usually requires some sort of keyboard. How does that translate into a VR experience? Firefox Reality gives you the option of using a keyboard, after Mozilla engineers considered things like the angle at which the keyboard should appear tilted, Brown said. At the same time, the browser enables voice searching, since inputting text is not that easy.

Mozilla engineers also had to build environments for users, Brown said. Even though the environment is basically irrelevant to the browsing experience, users can feel uncomfortable being surrounded by black space. The browser gives users a choice of the environment they'd like to be in.

Users also have the ability to adjust the screen size or the brightness. "A lot of it is giving users choice within the interface, so they can customize it," Brown said.

Mozilla said it will be adding new features to the browser "at a steady pace," including support for bookmarks, 360 videos and accounts. The company is also working with creators to ensure there's VR-ready content for users to browse, such as games, videos and experiences.

If you are among the 3 percent still with a Symantec certificate, you really need to shift -- that means you, PayPal.

Mozilla tests including Have I Been Pwned in Firefox