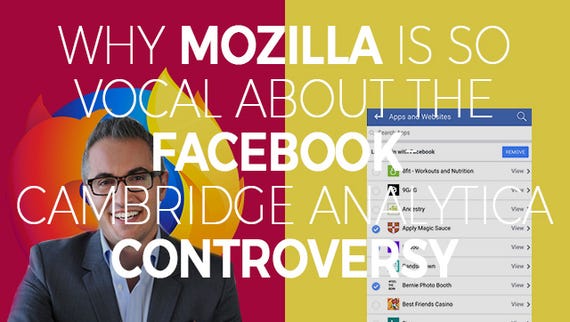 Video: Why Mozilla is so vocal about the Facebook-Cambridge Analytica controversy.

Smartphones have made it easier than ever to access the internet, but Mozilla is still concerned it's being dominated in a bad way by tech giants that are too fast for regulators.

Mozilla's first Internet Health Report shines a spotlight on some of the "unhealthy aspects of the internet" that have dominated headlines over the past year, including fake news, an internet tending towards oligopoly, and social-media threats to democracy.

While Mozilla sees improvements in access, affordability and HTTPS web encryption, it says censorship, online harassment and energy use are getting worse.

The sprawling report is a collection of major events, themes, and controversies over the past year that are epitomized by Facebook's Cambridge Analytica scandal.

This cocktail of issues creates fuel for fraud and abuse with extremely negative real-world outcomes, he concluded.

"The online advertising economy is broken and easily bent to fraud and abuse," a section of the report says.

Companies called out in the chapter 'Too big tech?' include Google, Facebook, Amazon as well as China's Baidu, Tencent, and Alibaba, which have "become intertwined not only with our daily lives, but with all aspects of the global economy, civic discourse, and democracy itself".

While it acknowledges these companies have brought benefits to internet users, it says that "they are too big" while their dominance over AI and quantum computing may ultimately limit innovation "unless we find a way to disrupt them or break them up".

Mozilla also calls on regulators and citizens to modernize antitrust laws so that governments can redistribute power in the internet economy. Regulators could, for example, mandate interoperability in messaging apps, so that WhatsApp users could chat with Signal users.

Other sections of the report offer a snapshot of how much control social media and tech giants have over the internet and communications.

The report also offers a reminder that fake news is a wider problem than just Russia versus the US, and that it is widely used by other authoritarian states and democracies.

"Governments, militaries and political parties are using the internet to manipulate public opinion at home or abroad under entirely false pretenses. They employ proxies and deploy trolls, bots and other techniques to obscure who they really are," Mozilla writes.

The discovery during the US election that Macedonian bloggers were writing fake news stories about Donald Trump was merely a byproduct of a business model defined by impressions and ads.

While they'd created English-language websites with health, sport, and finance content, stories about Trump proved the most popular and earned the most.

"Stories about Donald Trump. Exploiting the same social-media mechanics as described above, Macedonian teenagers were able to make the 'attention economy' work for them. Realistically speaking, these are the same dynamics that make Trump the biggest story in mainstream US digital news media. People click, ads pay, more articles are written."

Why Mozilla is so vocal about the Facebook-Cambridge Analytica controversy

Part one of a two-part interview: Mozilla just revamped its Firefox browser, but CMO Jascha Kaykas-Wolff says the company has cared about issues like privacy and consumer empowerment since Day One.

After foisting a cryptic browser extension on US users, the nonprofit promises changes to stop anything like that from happening again.

Developers: These are Mozilla's Firefox changes that will affect you in 2018 (TechRepublic)

Join Discussion for: Mozilla: The ad economy is broken and it's...