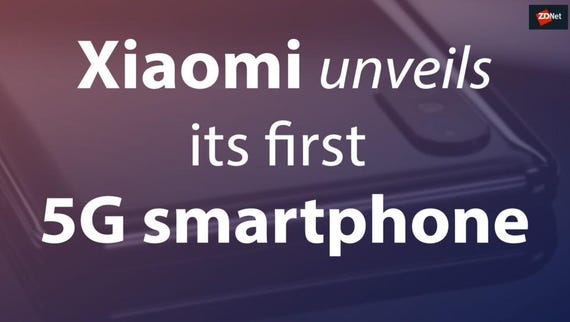 Xiaomi hosted a product launch on Sunday that unveiled its first 5G smartphone, the Mi Mix 3 5G, ahead of this year's Mobile World Congress in Barcelona.

The Mi Mix 3 5G uses a Snapdragon x50 5G modem that can provide downlink speeds of up to 2Gpbs and is powered by a Snapdragon 855 processor. It also has a 3,8000mAh battery.

It appears the 5G smartphone will have most of the same specifications as the existing Mi Mix 3, using the same 6.39-inch bezel-less AMOLED screen as its non-5G variant that had launched in October. Instead of a notch or punch-hole display -- like Samsung's recently unveiled Galaxy S10 -- the smartphone uses a sliding front-facing camera to give it a 93.4 percent screen-to-body ratio.

The body is made of ceramic, has a dedicated Google assistant button on the left-hand side of the phone, as well as a fingerprint sensor on the rear. The Mi Mix 3 5G also has dual 12 megapixel rear cameras, along with a 24 megapixel and 2 megapixel dual front camera set up.

It will be available in two colour options: Onyx Black and Sapphire Blue.

The device will be priced at €599 and be available in May, 2019. It will be sold by its partnered mobile carriers 3, Orange, Sunrise, Telefonica, Tim, and Vodafone, as well as in authorised Mi stores, and its website, Xiaomi Global director of Product Management Donovan Sung said at the product launch.

According to Sung, the development of the smartphone would not have been possible without its partnership with Orange.

During the product launch, Xiaomi also performed on-stage its first 5G video call outside of China that was powered by Orange's 5G network in Spain.

"Real 5G, and not fake 5G," Sung said after completing the 5G call.

The Chinese tech giant had launched its flagship smartphone last week, the Mi 9, which has three rear cameras, as well as its slightly cheaper sibling, the Mi 9 SE.

The Xiaomi Mi MIX 3 is an impressive mid-range handset with a near-bezel-free screen thanks to its front camera slider.

Updated: Researchers say the vehicle's authentication protocols leave much to be desired.

The Mi 9's sub-$500 starting price could appeal to Chinese consumers turned off by the $1,000-plus iPhone XS.

The Redmi Note 7 offers a feature-complete smartphone for $150. With a bill of goods that low, why are US smartphone buyers being gouged for flagship phones?