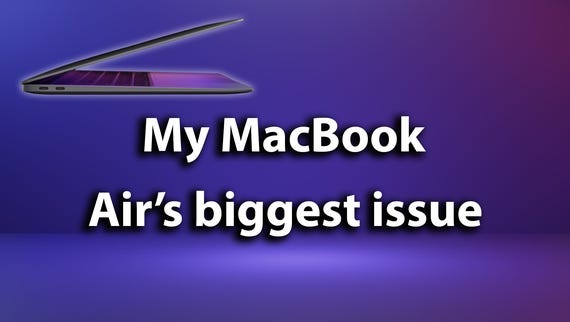 My Apple MacBook Air was exciting. Then it made me mad
Watch Now

As with so many little disasters, this was all my fault.

I left my MacBook Air perched on the armrest of the sofa. I turned to my right to grab a drink. I turned back to my left. Down went the MacBook Air.

It landed on the base of a standing lamp. I picked it up. I carried on working. Hey, it was Thanksgiving Day; what was I supposed to do?

Later that day, I was done. With something approaching ceremony, I shut my MacBook Air. It refused. Well, it half-refused. The right side shut just fine. The left side hung in the air like a Floridian chad.

I tried to close it with a little force. The left side came straight back up. I tried cursing it. It was unmoved. What was I supposed to do? The next day was Black Friday. Did I really think there'd be an Apple Genius available to help?

Black Friday? The best day for a fix.


I swiftly learned something about Black Friday. No one wants to get their gadgets fixed that day. I looked for a Genius Bar appointment at the Apple store, and the response was: Sure. What time would you like? They're all open.

So, as everyone rushed to find many a non-existent bargain, I wafted to an Apple store to find help. Oh, I forgot to mention, I had a flight to take the following day. A transatlantic flight. I needed a laptop that worked and, well, shut.

I was met by a typically relaxed and friendly Genius. I told her the truth. I told her it was my fault.

She gently pitied my foolishness, then turned my Air on its side. She shut one eye. She opened it. She shut it again. Then she pronounced: "So you see it's bent on the left side. But the screen hasn't actually cracked."

"So you'd have expected it to crack?" I asked.

"Do you think I could get away with taking it overseas, and it'll survive?"

"It might be OK. And, in any case, if it cracks, you can take it to an Apple store," she mused.

As it happened, my final destination, Portugal, doesn't have official Apple stores. I couldn't be sure of a quick fix, even if it did. This wasn't looking good.

"What's my other alternative?" I asked. "Do I really want to upgrade from this Intel Air to an M1?"

"It's not a bad idea," said the Genius. No, she didn't offer me some special price. She knew, and I knew that I was in a self-inflicted pickle, one that could go very sour if I didn't have a reliable solution.

Shocking, I tell you. Just shocking.


Before I could stop to consider the meaning of life, I was in possession of a space gray M1 MacBook Air . Oh, and a $100 Apple gift card. Cupertino is so generous with its Black Friday deals.

I've read many wise reviews of the M1 Air. Most have been complimentary. But I'm innately skeptical. I didn't believe it was going to be so different from my trusted if now bent, Intel version.

Loading from my backup G-Drive was simple. It took around 90 minutes, but it all worked.

That's when the shocks began.

This thing was so much faster than my eyes had to perform behavioral adjustments.

A few weeks before, I'd test-driven a Polestar 2 and was somewhat stunned by its extraordinary acceleration. This M1 had a similar effect. It was as if I was using an entirely new kind of laptop -- one that looked exactly the same as my old laptop.

I hadn't wanted to believe this would be the case, but it was.

Then, the second shock. I've been using the M1 Air for two days now. I've been writing, working and watching videos, around twelve hours a day. The battery hasn't even approached the halfway spent mark.

With my Intel Air, I'd have watched one live football (saacker) match, and the battery indicator would already have drifted below halfway. Here, it barely moved off full.

Then there was the fan. The no-fan-at-all experience, one I'd had to tolerate on my Intel Mac, as I watched many games on ESPN+ or Paramount Plus -- or viewed sites like MailOnline.com. Suddenly, no fan noise. Nothing. At all.

Though I use many of its wares, I'm wary of Apple's barely concealed pomposity and its insistence that everything is so very exciting and revolutionary.

This M1 Air, however, had me floored.

A shock to my system. A very bad shock.


And then, the final shock.

I suddenly got a message many M1 Air users have recently received: "Your system has run out of application memory."

This seemed ridiculous. Nonsense. My usage was blissfully normal. I had only a few tabs open in Firefox and wasn't using any particular apps. Yet here was my Air insisting I close Finder, Chrome, Firefox and pretty much everything else, or it would move no further.

This was more than annoying. It felt asinine. It was like a problem from years ago. The Genius had told me that this 8GB M1 Air would, as with my previous Intel one, be entirely sufficient. Yet here, after less than a week's usage, was the machine forcing me to be aware of my Activity Monitor constantly. I'd prefer not to do that. Ever.

I know you'll tell me next year's Air will be even better, faster and prettier. I know I may be annoyed when it is. I worry that my subconscious will try and get me to drop this M1 Air from a great height, to give myself an excuse to get the next one. Or will I, instead, give this M1 Air back?

I still find it strange to witness such an exponential difference between what I'd accepted as the norm and the thing on which I'm writing this column.

In the past, Apple blatantly lied about the Air and its butterfly keyboard. It really was an awful product.

Moreover, when the new M1 MacBook Pro came out, I went to an Apple store, only to be told by a, um, Apple specialist that the Air was merely a Honda Civic.

Yet here is something that would make me test drive a Honda Civic, just to see how much it's changed.

Unless that is, I keep getting that application memory message. In which case, this may have been a very fleeting affair.