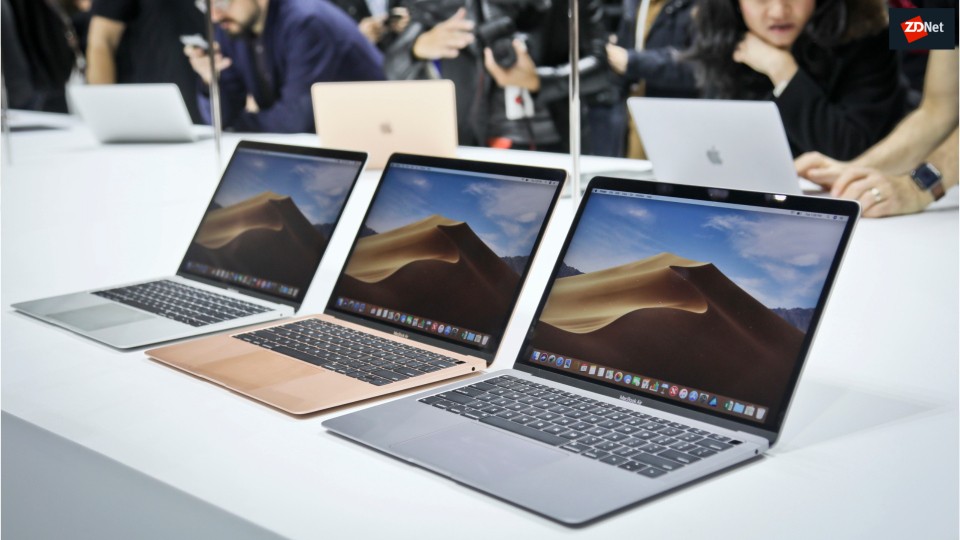 I'd heard the stories.

I'd read some of them, too.

Apple's latest MacBooks, the stories said, had clearly been designed by a bunch of inebriated Beelzebubs who were tired of retrograde customers thinking laptops were still relevant.

Or could this have merely been the interns' summer design project?

We didn't really have time for this. Maybe you guys can solve it.

After all, Apple has kept insisting the iPad Pro is a computer, so why do all you backward types keep begging for a new MacBook?

I'm one of those backward types. I've been using portable Macs ever since I first set eyes on them. Their sheer simplicity and efficiency has helped keep me in employment and sports highlights for more years than some readers have been alive.

So when the kerfuffle about the MacBook's butterfly keyboard first began, I wanted to believe this was just an isolated design flaw, one which Apple had now solved.

Yes, it was Cupertino's third attempt at solving it, but third time, charm etc.

So I bought a new MacBook Air at the end of last year. I didn't adore it. It was a little more noisy and, if anything, it felt a little cheaper than previous iterations.

Still, I didn't have any actual problems of the kind some had been describing. The Wall Street Journal's Joanna Stern, for example, had serious trouble with her E's and R's. She wasn't alone.

Apple began issuing muted apologies. It insisted this keyboard malfunction thing is an issue for only a tiny minority of users.

I took an extra precaution. I went to a couple of Apple stores to see if employees would follow the company line or let slip that this was a much bigger deal.

Me: "I hear people are complaining that these keyboards don't work very well. Haven't there been problems with dust?"

Apple store saleswoman: "It's the opposite."

She explained what she meant by the opposite: "There's no way dust can get in because they've put an extra layer of plastic underneath to make sure it doesn't."

My heart skipped a beat in glee.

At a different Apple store, a saleswoman told me that no, no, she'd never even heard of such keyboard problems. She added that her own MacBook worked perfectly.

There. I had my answers. This was an isolated affair. I could now go on a long trip, confident that my Air would not deflate beneath me.

Welcome To Heathrow. Or Should That Be Welcoe?

So, after landing at London's Heathrow Zoo, I thought I'd spend a few jetlagged minutes before my connecting flight writing pithy words about, oh, nothing immediately came to mind, but hopefully I'd think of something.

I began to write, hoping soon to find sense. What I found instead was that my M key had endured a difficult flight.

Suddenly, it was refusing to be depressed. It was going on strike.

I pressed the key and my screen was M-less. I pressed a little harder and the M-lessness seemed hopeless.

It was only when I pressed very firmly, on the very middle of the key, that the chosen letter appeared on my screen.

Yes, despite Apple's third attempt at fixing it, I was yet another of the keyboard victims. Or, as some would surely prefer, losers.

Perhaps some crumb or speck of dust had inveigled its way beneath this one key. Was it a butter croissant crumb or one from a pain au chocolat? Could it have been ordinary wheat toast?

Perhaps it was an eyebrow, an eyelash or one of my last head-hairs.

And now it was my problem. A first-world problem, of course, so please forgive the whining. It's merely a sad, existential whining, caused by a faith gone awry.

Moreover, I'm now in Lisbon where there are no Apple stores, only authorized Apple resellers. Did I want to bother them? No. Did I bother them? Of course. I had to check whether Apple's promise of one-day repair holds here.

"As a reseller, I have to send your MacBook to an authorized service provider," the very helpful authorized Apple reseller told me.

"How long will that take?"

"I have to tell you the possible number of days. It's 30. It could be less, of course, but it's best to get it repaired in America."

"I've only had my MacBook for a few months," I said.

"It's very bad," he replied. "You pay your money, so you should get something for that. This is a terrible design."

I'm determined, in fact, to see how long it'll be before my M becomes entirely inoperative. I want to discover whether more keys will succumb to this obvious and desperate design flaw. I want to see just how useless this third-generation keyboard truly is.

This MacBook Air is less than six months old.

Not only is the M-key two-thirds of the way to its coffin, but the letter A on the A-key has already smudged to the point of being almost entirely blurred.

I can't help but conclude that this thing is cheaply, myopically made.

At what point does an issue become a complete embarrassment? Oh, we're there already?

I've owned perhaps 20 or more Apple products over the years.

Not once has any of them started to malfunction in the first six months.

Many of them never malfunctioned at all.

Yet here is one of Apple's most lauded, stable products -- one that I once described as the company's best-ever product --  reduced to a pathetic mess by a combination of arrogance and inattention.

I wonder what they'll say if I go back to one of the Apple stores which tried to reassure me.

It serves me right, of course. I'm the fool here. I should have realized that my Air might be just as vulnerable as any other.

Worse, I was smeared with such overconfidence that I didn't even bother bringing my usual backup.

It's called an iPad Pro.

On that machine, you see, nothing can ever get under the keys.