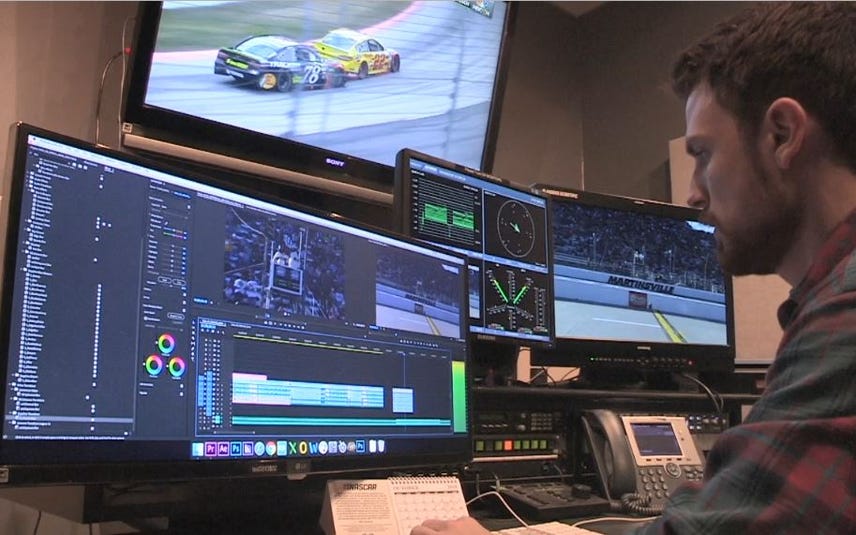 NASCAR motor racing is a thrilling sport with deep history and culture, as I detailed in my previous post after visiting its headquarters earlier this fall. I previously wrote it has been striving, like countless other businesses, to evolve and remain relevant in our rapidly changing times.

The 2018 season has just concluded with a final championship deciding race, the Ford EcoBoost 400 at Homestead-Miami Speedway. NASCAR made the above video to illustrate the complexity of its race day operations, both at the race track and in its state-of-the-art Charlotte North Carolina headquarters.

Housing one of the biggest TV production studios on the east coast, NASCAR headquarters broadcasts motor racing worldwide to 120 countries along with sophisticated social network monitoring and interactions.

Yet, as Brendan Marks wrote in the hometown newspaper the Charlotte Observer, NASCAR is in "uncharted waters."

In a world of homes full of giant 4K screens, cable cutting, and short attention span social network gadflys, pretty well all stadium sports have been struggling to attract new fans and event attendance. The one exception has been 'heritage' music acts (rock bands such as the Rolling Stones). In a sport which relies heavily on sponsorship and exposing brand logos to mass audiences, the archaic business measurement metrics of our digital times are creating huge problems.

The old bedrocks of broadcast and cable TV packages remain vital, but their ratings metrics no longer tell the whole story for racing leagues like NASCAR, which now has an impressive online presence and race packaging, as you can see richly illustrated above. The changing demographics of human behavior mean fewer people are showing up at races while more are following online.

As is so often the case in a business world where 'if you can't measure it, it doesn't exist / you can't manage it / you can't improve it' mantras dominate thinking, NASCAR is a microcosm of the realities facing businesses across all sorts of verticals. The measurement metrics aren't keeping up with the pace of change, which in the case of a NASCAR racing team means sponsors can't see the value of their investment.

Also: Team Penske revs up its use of Stratasys 3D printing tech

NASCAR is the sanctioning body, meaning it makes the rules and run the races but doesn't own the tracks or the race teams. For every race event, NASCAR lays miles of fiber, shoots state of the art HD video inside and outside the cars, and creates a total digital immersion for anyone tuning in that is light years ahead of anything even five years ago. The data capture at the track is astounding, with transponders every 800 feet and the Hawk-Eye monitoring technologies that are also used in tennis and other sports. The result is a real-time data flow dream for stats enthusiasts, but the fundamental business goal of attracting backsides on seats and sponsor viewing eyeballs remains a huge problem in our rapidly evolving times.

Just as online shopping platforms have killed giant swathes of store-front retail, the internet generation favors 10-second highlight reels on their phone over driving to attend three-hour sports events. You could make a strong argument the internet 'dumbs down' real life far more than TV ever did.

For the 2019 season, NASCAR will be making huge efforts to orchestrate exciting, close racing -- but probably even more importantly all the technological sophistication you see in the video above will increasingly be the NASCAR 'product,' a sophisticated mix of live race action, data feeds, social network interactions, and consumer view point experience choices across multiple screens. Where the team sponsorship money value proposition fits into this equation to fund a very expensive sport is the million dollar question.

NASCAR has the technological sophistication to put on the show, as the above video illustrates. The question is whether it can create fresh new recipes for an attractive consumption package that attracts new motor racing enthusiasts and traditionalists alike.

NASCAR: On the track and behind the scenes

Google has added a range of major sporting venues to its Street View collections for armchair virtual visitors.

How sports analytics can teach enterprises how to approach HR, risk and AI

ZDNet's Larry Dignan and TechRepublic's Jason Hiner outline how sports provides a great test bed for analytics and what businesses can learn.

NFL in London: How data and technology are changing sport

John Bacon, director of operations for NFL's Next Gen Stats at Zebra Technologies, explains how information is helping to change sport for the better.

SUNY Canton, a state university of New York, tells Tonya Hall how e-sports is enhancing their recruitment, engagement, and retention.

The sports industry is exciting and cool and has brand equity like no other. Yet, the companies themselves don't have a lot of money to spend on their business operations due to what they are (over)paying the athletes. Does this mean the tech companies selling tech to the sports world should ignore the industry they're selling to? Apparently, they think so. Find out why is not only a bad idea, but a very very foolish one. And I'll name some names.

Developer
How to get college credit for work experience