Eight years after Apple's iPhone 4 Antennagate fiasco, we are seeing complaints from iPhone XS and XS Max users that Wi-Fi and cellular reception and performance isn't living up to expectations. FCC lab test results appear to lend credence to these concerns.
Written by Matthew Miller, Contributor on Sept. 25, 2018 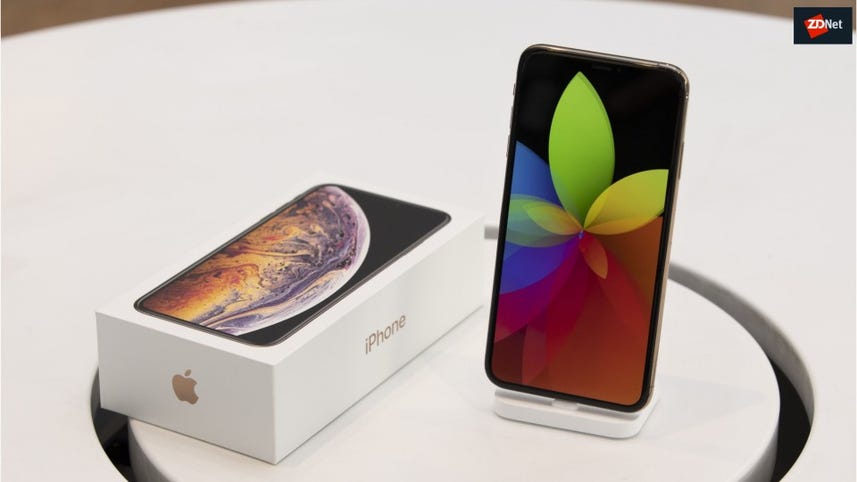 Eight years ago, Apple's iPhone 4 struggled with an antenna design problem that came to be known as Antennagate. Apple's proposed solution at the time: Change the way you held the phone or use a bumper case. The new iPhone Xs Max and iPhone Xs launched late last week, and over the last few days reports of connection issues in low signal areas have appeared on various Apple and MacRumors forums and on social networks.

It's worth noting that forums are places where people go to share problems; when things are going well, people do not generally visit a forum and speak up. Forum users are reporting weaker signals and poorer performance with the new iPhone models while in low signal areas. Many of these people still have last year's iPhone X in hand -- or have just traded them in -- so they are able to offer up comparisons between their previous model and the new 2018 iPhone model.

Also: How to decide: Picking the 2018 iPhone that's right for you

On the other hand, there are also many replies on websites like The Verge and on social networks from users who are seeing the same or better signal performance on the new iPhone Xs and Xs Max.

At this time, it is hard to quantify if this is a widespread, global issue or affecting just a small percentage of iPhone users. It also appears that the reports are coming primarily from areas with weak signal coverage; those in large cities or urban areas may not be seeing any connection issues if coverage is generally strong all of the time. Speed tests also are generally showing good results, but speed tests are not telling much about the signal strength in marginal coverage areas.

Some early theories suggested the move away from using Qualcomm processors -- all new iPhone models have Intel modems -- is a possible cause of the connection issues. However, Andrew Shepherd, who has been spending some time analyzing recent FCC reports, explains why the change in modems is likely not the cause of these reported connection concerns.

Shepherd's analysis of FCC lab tests show that the observed performance of EIRP (Equivalent Isotropically Radiated Power) for the new iPhone Xs and Xs Max indicate there could be issues in low signal areas. The weak antenna gain identified by Shepherd could possibly be addressed by increasing the conducted power through a software update or increase antenna gain via a hardware manufacturing revision.

It is not just cellular reception issues that people are writing about; flaky Wi-Fi connectivity with 5GHz networks looks to be a common theme. Reports comparing older iPhones with the 2018 models indicate less than half the speed over Wi-Fi.

Another theory being suggested is related to software and Apple's management of LTE bands. With these new iPhones having 4x4 MIMO support for the first time, it's possible a firmware update or carrier settings update could resolve any band switching issues. The connection concerns are reported in areas of weak signal when a phone is more likely to switch to other bands to try to maintain a connection.

Update: Mr. Shepherd posted an updated blog post to clarify his analysis and try to keep people on track for what the FCC results showed and what his conclusions are. I believe I capture things correctly in this post, but to make sure wanted to share the link to his latest so that nothing is taken out of context.

I've had an iPhone X for about a year and it has always performed worse than Samsung and other Android phones on T-Mobile. My iPhone Xs Max, again on T-Mobile, arrived today so I will be able to capture some direct dBm readings on the iPhone X and Xs Max at the same time to see if there are reception issues firsthand.

Several websites have reached out to Apple for comment. It's likely too early in the cycle to quantify any issue, but if you have an iPhone Xs or Xs Max we would appreciate knowing the details of your connection performance. You can check your dBm signal strength by performing a field test on your iPhone. Android users can simply check their connection performance in settings.

Apple faces yet another investigation by European regulators over iPhone battery slowdowns.

iPhone Batterygate: The environmental cost of the smartphone explosion

To be better citizens of our planet, we need to reconsider the current disposable smartphone designs.

Will your smartphone's VPN app protect you when you use it as a hotspot for your laptop? We answer this question and show you how to keep your connection safe.

There are too many charging and interface cable standards in place. We can fix this, but it will take effort and broad industry buy-in. And Apple would have to fall in line

Apple and 5G: It's not about the iPhone

Don't expect the next iPhone to support 5G. Or radical changes when a future one does.

No internet: The unbearable anxiety of losing your connection

David Gewirtz had things under control: No landline. No cable TV. No regrets... until the internet failed. Is always-on connectivity making us all a little crazy?

Mobility
Zendure SuperBase Pro 2000 hands-on: All the power you need