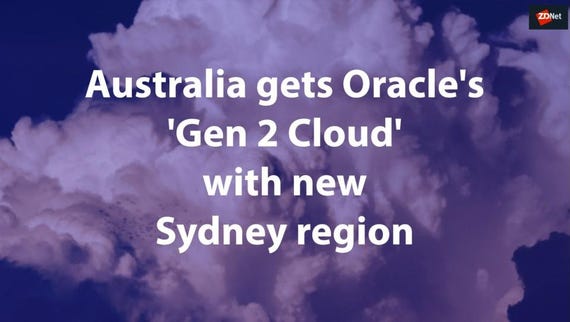 Oracle wants to remove as many hurdles for companies when they move to the cloud, Oracle Systems and Technology Business senior vice president Andrew Sutherland told ZDNet.

The company has made various moves in 2019, such as unveiling its second generation cloud and creating a cloud interoperability partnership with Microsoft, in a bid to improve the customer experience behind using its cloud for enterprise.

According to Sutherland, moving workloads into the cloud isn't always the best option for businesses, so Oracle's new cloud and Microsoft deal in combination will make it easier for companies to have a hybrid approach to their workloads.

"We're cognisant of the fact that in the early days, there were talks of many companies closing down their data centres and moving everything to the cloud -- rare for a whole host of reasons," Sutherland said.

"What's more likely to happen is that organisations will look at a particular workload and maybe it's running out of capacity or maybe the underlying hardware is reaching the end of its life -- but there's often a business reason to consider before moving and improving that workload into the cloud."

With the Oracle-Microsoft partnership, businesses will be able to create direct network connectivity between Azure and Oracle Cloud, allowing Oracle's existing customers to have the option of either keeping their workloads on an Oracle database or moving it to the cloud.

The partnership makes sense for Oracle, Sutherland said, as many of its customers have workloads that are written in Microsoft languages and use Microsoft applications such as Azure, so "the evolution of that" was to make its second generation cloud have direct network connectivity with Microsoft Azure.

Pointing to a customer-driven experience, the second generation cloud is embedded with artificial intelligence (AI)-based applications, machine learning-integrated security, automated analytics, and the Oracle Autonomous Database, which CEO Larry Ellison has touted as being the most important part.

"[The autonomous database] is not just a slightly better version of a database. It actually fundamentally affects not only the cost to manage data, but actually, it allows you organise yourself differently," Sutherland said.

An example of the autonomous database's capabilities, Sutherland told ZDNet, was that it was able to automatically optimise the performance of its NetSuite application without the assistance of engineers, a task which had previously taken years to perform.

The company's generation 2 cloud is set to go live in Sydney, Australia later this month, alongside three others launching this month in Mumbai, Zurich, and Sao Paulo.

Another one is slated to open in Melbourne early 2020.

In Australia, Microsoft currently has accreditation from the Australian Signals Directorate to store highly classified government information up to "protected" level on its Office 365 platform and specific Azure services. Oracle declined to comment on whether it would gain access to these certifications as part of the partnership, stating that the partnership is still in its early phases.

While surveys have suggested Oracle customers are wary of moving their workloads to an Oracle cloud, the enterprise software giant delivered better-than-expected fourth quarter earnings from strong NetSuite and Fusion ERP and HCM subscription revenue.

The neverending Oracle vs. Rimini Street court battle may be nearing the finish line after the Ninth Circuit Court of Appeals maintained an injunction and affirmed an attorneys fee award to Oracle.

Acquisition of Netsuite developer is announced as the software giant presses ahead with a plan to grow its SME market share in the country.

By inviting more startups to adopt Oracle Cloud, the enterprise giant is hoping to build inroads with the tech leaders of the future.

Oracle's reputation for aggressive use of audits to push customers to their own cloud services makes the prospect of an Oracle-to-AWS migration look turbulent, but it doesn't have to be.