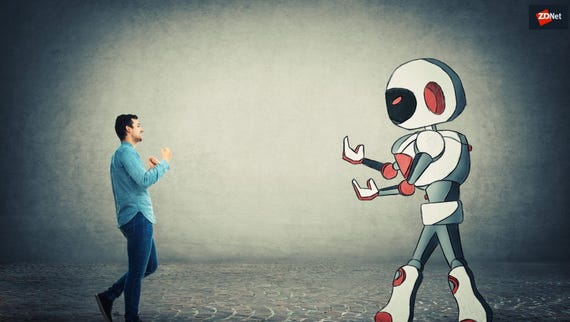 These are the jobs AI is destroying and creating
Watch Now

It'll get us all in the end.

It's just a matter of time.

One day, there'll be machines that walk like you and talk like you. You, then, will verge on the superfluous, just a prototype for a fine series of machines.

A marvelously chilling analysis by LinkedIn offers a slightly gruesome picture of the life that is to come.

Igor Perisic, LinkedIn's chief data officer, presents a chart that shows which jobs have atrophied the most over the last five years.

At the top is administrative assistant. Well, yes, none of us needs help these days. We can all do everything for ourselves. Except get off Facebook.

Oddly, salesperson is the next most-destroyed job. Could it be that machines are selling us on most things, and we don't even know it?

Next on the list of endangered species is customer service representative. See above. A machine will assist you shortly. Meanwhile, that machine will play you some music to annoy the innards out of you.

Just above -- or, depending on your perspective, below -- come journalist and editor. There's no taste left in this world, is there?

Another endangered job, though, is accountant. You mean machines can now tell you how to, ahem, advantageously present your expenses? That really is human progress.

Perhaps at least some of this is expected, if sad.

As is the job with the most growth over the last five years: Software engineer.

I know they're recreating the world. I'm just not sure they're doing such a wonderful job of it. In any case, don't they have AI to help them these days? How's that working out?

LinkedIn, though, insists that, as we're automating more, we're also finding a greater need for those with human skills.

That's why the job that's enjoyed the second-largest increase in hiring over the last five years is, oh, marketing specialist.

The future, it seems, will involve machines doing most of the work, while humans sell that work to each other.

Third on the growing list, though, is human resources specialist. We'll need a lot more people whose job it'll be to find more people who are good at selling to other people.

Well, a machine didn't write The Art of the Deal, did it?

Why can't a machine do that?

Also: The 6 most in-demand AI jobs, and how to get them

It's when I came to the sixth most in-demand job that I sat down on the floor, made involuntary motions with my ear lobes and solar plexus and sobbed for around three hours.

That sixth most in-demand job is real estate agent.

You mean no software engineer has yet managed to create an AI bot that can do what real estate agents, some of capitalism's greatest charmers, do?

What did I tell you? We're doomed.

Join Discussion for: It's not the jobs AI is destroying that bother...