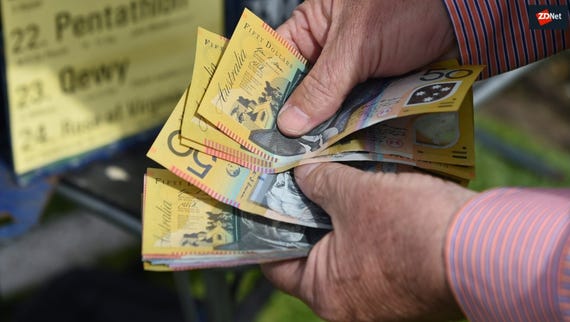 Australia is a genuine world leader in two technology realms: The ability of government to turn any IT project into a flaming waste of time, energy, and money; and the uptake of contactless payments across the economy.

The former gets plenty of attention, so it is worthwhile looking at the latter, because there is every chance it is coming to a cash register near you in the next couple of years if it isn't there already.

Within Australia, and particularly Sydney, I am one of a dying breed: People who still use cash on a daily basis. But even given a predisposition to want to see money visually escape my possession, there's no denying that contactless payments via NFC are a quicker way to transact.

Take the classic Australian activity of a few alcoholic beverages after work. Once upon a time, it was a common sight to see a collection of paper and metal in front of patrons at the bar, and nowadays, there is a clear if unstated expectation that drink purchases will be made in a cashless fashion. That's due to the AU$100 upper limit on functionality like PayWave that allows for payments without a PIN needing to be entered. For activities like buying coffee, a round of drinks, or a lunch purchase, it has less friction than cash -- customers wait less, and businesses have higher throughput.

Also see: Wearable payments: A gimmick that might take off

Any time that the idea of a cashless world is floated, a number of arguments against it appear: The government can use purchase history to track citizens, gather taxation, and eventually end the idea of using cash altogether; and banks are using this purchase history to power big data engines for who knows what ends, or on-selling the data to god knows who.

Now, thanks to people taking mobiles with them everywhere, tracking individuals via purchasing is actually the stupid way to go about it. In Australia at least, if you are a cop you could query the nation's data retention scheme, which forces telcos to store location data, just like they do elsewhere on the globe.

As for taxation, well, that's what governments do, and if a government chose to end the use of cash altogether, it's probably not the first red flag that things were getting a little authoritarian. China's social credit system is a totalitarian wet dream, and it works within a cash economy.

On the concerns about businesses and banks playing with data, it is a very real concern, and vigilance will be needed to clamp down on any transgressions. Thanks to initiatives like Australia's Consumer Data Right, any bank that is silly enough to play games with its customers' data will find itself with far fewer customers. But at the time of writing, it is so far, so good.

The use of cashless payments has reached such a point that Australians see cash-only business as untrustworthy, according the Australian Taxation Office.

"The real cost of cash to business seems to be twofold. Consumers are twice as likely to associate 'cash-only' as negative rather than positive ... being cash-only may have a direct impact on reputation," Assistant Commissioner Matthew Bambrick said last month.

"Secondly, time is money for business. Tap-and-go payments cost an average of 9 cents less than cash payments, and are nearly twice as fast. This research suggests cash-only businesses take a hit to their bottom line by not offering electronic payment."

From a consumer perspective, there is a nice feeling of relief when heading out for a quick bite to eat, only to find you have left your wallet behind but are still able to pay with a phone or, in some cases, a wearable.

Long gone are the days of people receiving an envelope of cash from their employer each week, so at some point the majority of people are going to have to deal with a bank of some description and begin leaving a digital trail.

Given that so far the convenience of the system is perceived to be worth the increased risk, Australians have decided that if they are in for a penny, they might as well be in for a pound.

Join Discussion for: Report from an almost cashless society