The original Galaxy Watch Active has only been out for a few months.
Written by Jason Cipriani, Contributing Writer on Aug. 5, 2019 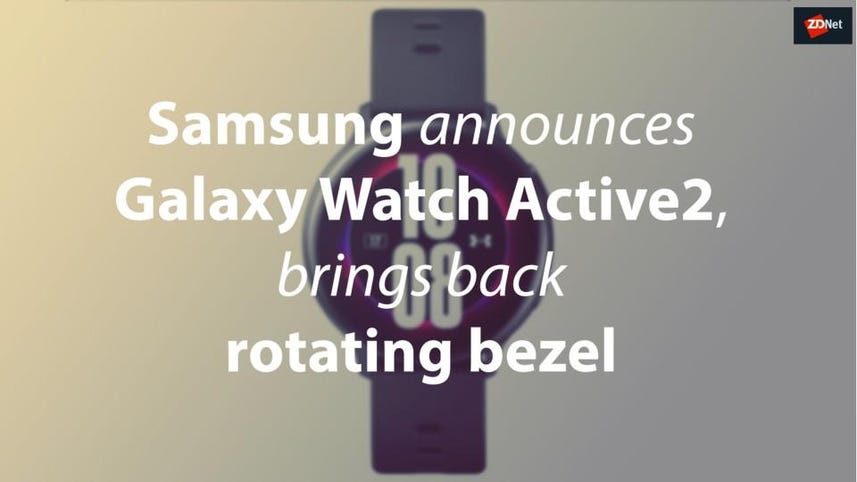 Samsung continues to clear the path for this week's Unpacked event to focus on the Galaxy Note 10, with Monday's announcement of the Galaxy Watch Active2. The second-generation Active Watch will come in two sizes, 40mm and 44mm, and three colors: silver, black, and pink gold.

The first Galaxy Watch Active launched in March but lacked a rotating bezel, one of the staple features Samsung's watches have been applauded for. The rotating bezel is used for scrolling and navigating the watch's interface. Without a bezel on the original Active, the watch relied on taps and swipes for navigation.

On the Watch Active2, Samsung has brought back the bezel, but instead of a physical ring on the perimeter of the watchface that rotates, it's a digital bezel.

CNET had a chance to briefly use the Active2, and Scott Stein found the new digital bezel better than the physical alternative.

The Active2 has electrocardiogram capabilities, similar to the Apple Watch Series 4, but the watch will launch with the feature disabled until Samsung is able to get the FDA's approval -- and according to CNET, there's no timeframe for that to happen yet.

Samsung also announced an LTE version of the Active2 that will be available at the same time on AT&T, Sprint, T-Mobile, US Cellular and Verizon, but pricing has yet to be announced.

Prior to Monday's announcement, Samsung announced that it has fixed its foldable smartphone, the Galaxy Fold, and expects it to launch in September. The company also announced the Galaxy Tab S6, an Android tablet with a new S Pen and keyboard cover designed to take on Apple's iPad Pro line.

Samsung will announce the Galaxy Note 10 on Aug. 7. We expect to see two different size Note devices for the first time, along with a new design and new features.