Samsung is shutting down its Linux on DeX projects after only 11 months.
Written by Cho Mu-Hyun, Contributor on Oct. 20, 2019 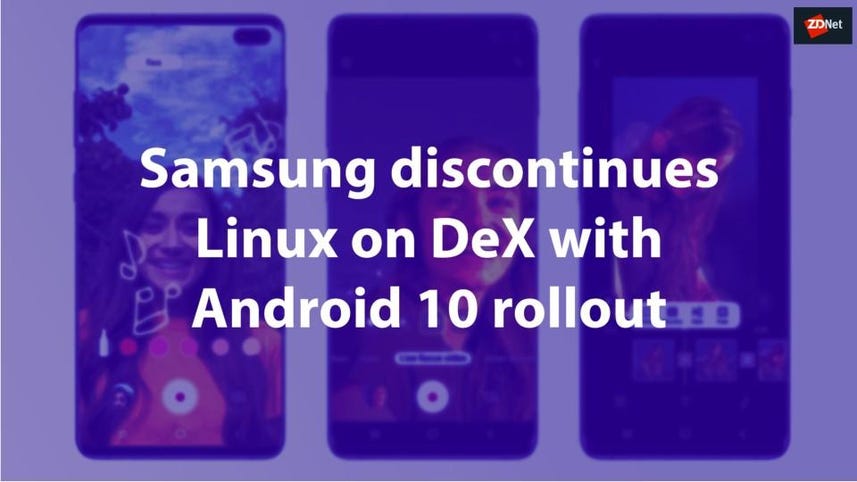 Samsung has ended its Linux on DeX beta program despite not yet launching a stable version of the Android alternative, bringing the Linux project that would have provided users with another software option to a close.

In an email sent to testers, the South Korean tech giant said it would no longer provide support for the program for future operating systems and devices.

This means there will be no further updates to the app or the current version of Ubuntu being used.

The announcement coincides with the rollouts of Android 10 and the new updated OS from Google, which do not provide Linux on DeX support.

"We would like to thank users for their support and interest in the Linux on DeX (LoD) beta program," the company said in a statement to ZDNet.

"We have decided to close the beta program which will end support for LoD on Android 10. Samsung is committed to offering innovative mobile experience and will continue to explore better mobile productivity."

The company started a private beta for the project back in November. The private beta allowed Linux to open in select Galaxy devices in DeX mode.

Samsung DeX allows users to connect their smartphones or tablets with monitors to simulate a desktop like experience. It was initially offered as a docking station for phones but users can now directly connect their devices to monitors via a USB-C cable.

Samsung is expecting a profit drop of 56% for the third quarter of this year due to a downturn in the memory market. Its mobile business, however, is expected to have a return to form with the release of its Galaxy Note 10.

It's not all good news for the company's mobile business though, as it was revealed last week that the ultrasonic fingerprint readers on Galaxy S10 and Galaxy Note 10 devices could be bypassed through a silicone screen cover.

Samsung has promised it would roll out a software update to fix the problem sometime next week.