Several Samsung Galaxy Fold review devices seem to have badly malfunctioned. What's the actual benefit of being first, if you can't be good?
Written by Chris Matyszczyk, Contributing Writer on April 18, 2019 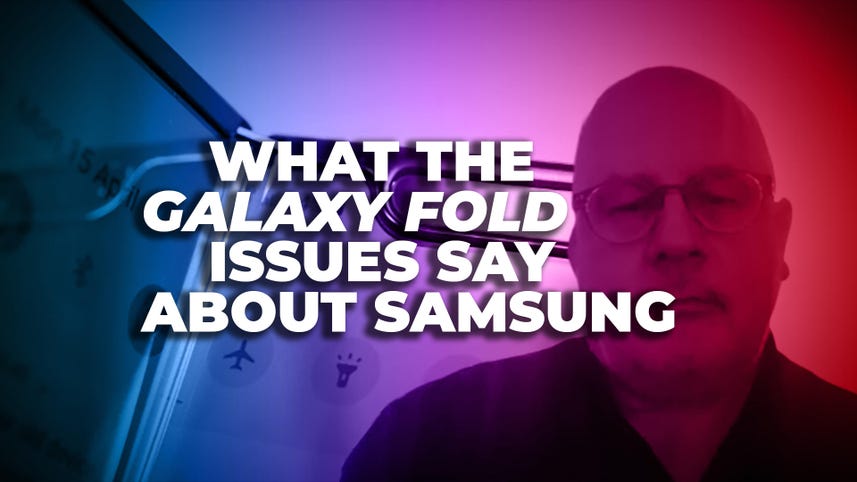 Not so long ago, Samsung crowed.

Apple had just come out with the iPhone X, so its biggest rival had to snort.

It released an ad that boasted how Samsung had, allegedly, been first in just about every phone development over the previous 10 years.

Apple was, apparently a sad, retrograde mimic. Its customers were pathetic, mindless creatures who would never get the girl.

Yet here we are with Samsung facing a potential debacle.

Screens on the Galaxy Fold phones sent to reviewers appear to be more brittle than many NBA players' egos. There's even a thin layer of protective film that can be peeled off -- and has been.

For reasons that aren't entirely clear, the Korean handset maker says it's going ahead with the launch of the Fold on April 26.

A Samsung spokesperson made it all seem like a minor snafu, rather than an unfolding disaster: "A limited number of early Galaxy Fold samples were provided to media for review. We have received a few reports regarding the main display on the samples provided. We will thoroughly inspect these units in person to determine the cause of the matter."

One might understand if it was just one phone. But when several reviewers experience different issues, isn't this a reason to pause?

Isn't it also a reason to reconsider the desperation of being first to market?

I can't help but imagine there might be one or two sniggers in the Spaceship this morning.

After all, Samsung has endured previous experiences with product launch embarrassment. When the Galaxy Note 7 was launched three years ago, too many of them exploded. When Samsung hastily relaunched it, more phones exploded.

Competition can really mess with your head.

The need to be first, and always first, can twist you up and tighten you to a painful hard-headedness.

Being second -- or third or even 10th -- has tended to benefit Apple. When a technology may be unproven, Apple waits to see what problems occur in real life. It allows its designers more time to refine and even remodel.

Rare -- though not unprecedented -- have been Apple's wiping of egg from its face. Yes, there was the iPhone 4 and holding it wrong.

But when Apple tests a product and worries whether it'll work, it tends not to release it. May you rest in a charged peace, AirPower.

And when Cupertino has released something that may appear at least slightly ahead of Samsung's offerings -- AirPods, for example -- they seem to work remarkably well, despite the fact that they make wearers look more ridiculous than a pink bow tie at a wake.

But if you're going to put new, exciting gadgets into the wild world -- especially if they cost $2,000 -- it's as well to ensure that those who review them first don't focus on the fact that the gadget appears to be falling apart.