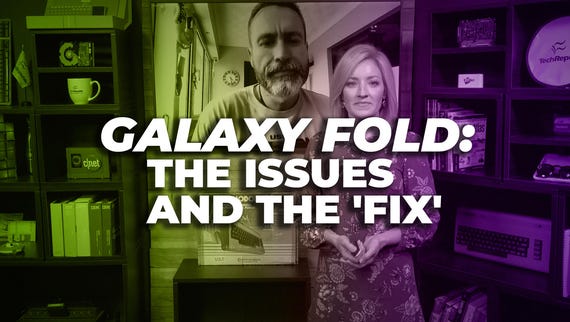 Samsung Galaxy Fold: The issues and the 'fix'
Watch Now

It didn't take long for reviewers who got their hands on early samples of Samsung's $2,000 Galaxy Fold smartphone to start reporting that their devices were experiencing catastrophic display damage along the hinge. And since the hinge that allows the display to fold is the flagship feature of the Galaxy Fold, this is a pretty big deal.

Headlines such as "My Samsung Galaxy Fold screen broke after just a day" are not what Samsung needs right now. After all, Samsung is still trying to shake off the ghosts of past issues such as the Note 7 battery fires and people jamming the S-Pen into their device the wrong way.

But Samsung has confirmed that the Galaxy Fold launch, scheduled for April 26, is still on.

But what's going on here? Is this a design flaw, or is it user error?

Samsung is coming out of the gate strong on this, having released a statement that points the finger of blame at the reviewers:

Another point is that Samsung is back to covering up potential design flaws by telling the user to not do things that they shouldn't be able to do in the first place. This was the company's response to the S-Pen issue with the Note 5.

However at least one of the affected reviewers did not remove the protective film. In fact, this reviewer believes the problem may be down to debris getting into the hinge mechanism.

This feels like a design flaw. And given that it affects the main feature of the Galaxy Fold (the bit that allows it to fold), then that's a big deal. While Samsung may be right that some of these failures are down to reviewers peeling off a vital protective layer on the display, even this sounds like a design flaw. The protective layer should be bonded to the display in such a way that it is difficult for the user to peel it off. It certainly shouldn't look like a bit that needs to be peeled off.

And if reviewers peeled it off thinking it was removable (reviewers handle a lot of stuff, and are, on the whole, smarter than the average bear when it comes to tech), customers are going to do the same, irrespective of whether Samsung tells them not to.

By sticking to the April 26 launch date and releasing the Galaxy Fold with nothing more than a warning to not peel off the protective layer, Samsung is playing with fire. Again.

Join Discussion for: Galaxy Fold screens breaking after a day:...