Samsung launched its Galaxy Note 8 in New York with a 6.3-inch display, a multitasking feature called App Pair, a dual camera, and various improvements for the S Pen stylus. 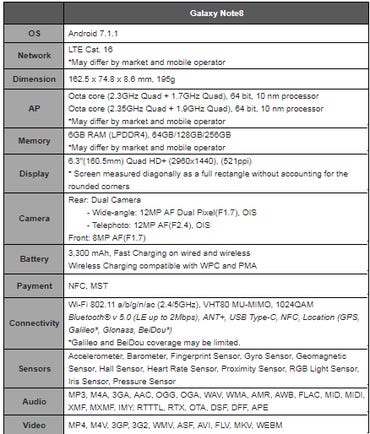 The Galaxy Note 8 had a few important items on the to-do list as Samsung launched the device in New York City. Among the items:

It remains to be seen whether the Galaxy Note 8 will check all of those aforementioned boxes, but it'll certainly deliver more than a few. Pre-orders start Aug. 24 with availability Sept. 15. Samsung is offering a chose of a free Samsung Gear 360 camera or Galaxy Foundation kit for people who order a Note 8 between Aug. 24 and Sept. 24.

Read more: Galaxy Note 8 hands-on: The upgrade Note users are clamoring for | Note 8 could get squeezed by other Android rivals | CNET: If you had a Galaxy Note 7, Samsung has a discount for you

Samsung started out its event in New York by thanking customers for sticking with the company and addressing the Samsung Galaxy Note 7 recall up front. DJ Koh, president of Samsung's mobile communications business, said "we are here to celebrate on of the industries truly unique devices." Koh, who was clearly looking to put the Note 7 recall in the rear-view mirror, trumpeted how Samsung created the phablet category and boosted productivity. "We are here today because of your support," he said.

Koh added that the Note 8 is aimed at go-getters who are loyal and want a unique device and have created a "tribe" of creatives.

Patrick Moorhead, principal of Moor Insight, said "the Note 8 strikes me as a really good consumer phone, but an even better business "get stuff done" smartphone. The Note8 has some features I believe will make enterprises and business people happy."

Among the key features rolled out by Samsung: