Samsung Electronics has unveiled its flagship Android tablet, the Galaxy Tab S4, with Samsung DeX connectivity for the first time on a tablet, giving consumers multi-screen options and a powered-up S Pen to cater to the enterprise and professionals.
Written by Cho Mu-Hyun, Contributor on Aug. 1, 2018 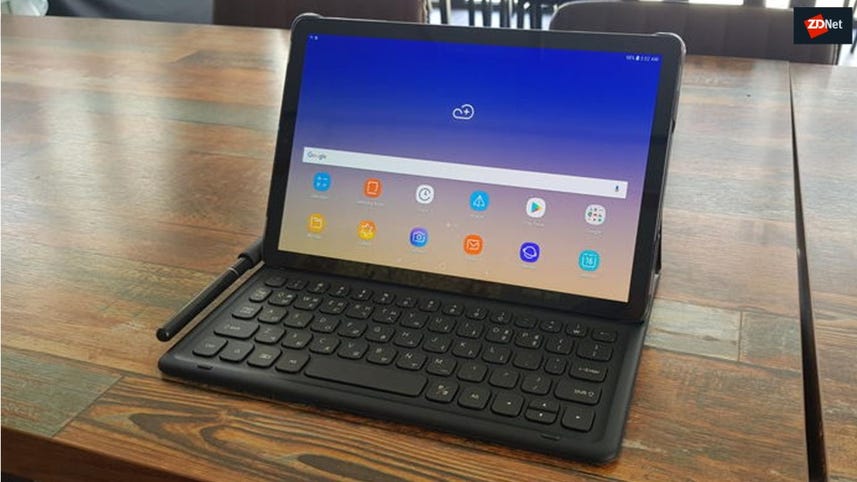 Samsung Electronics has unveiled the latest in its flagship 2-in-1 Android tablet line-up, the Galaxy Tab S4, which offers a slew of new options for consumers thanks to it being able to connect with Samsung DeX.

This is the first time Samsung DeX -- which allows the Galaxy S8, Galaxy S9, and Galaxy Note 8 smartphones to be connected to a keyboard, monitor, and mouse to become a "desktop" -- is available on a tablet.

The Galaxy Tab S4 can be connected to its optional Book Cover Keyboard or launched from Quick Panel to power Samsung DeX, allowing users to switch to a desktop experience. Samsung DeX will allow the opening of multiple desktop-style windows for apps on the tablet, the South Korean tech giant said, including Microsoft Office suite, to control their size when needed.

When connecting Samsung Dex to an external monitor via HDMI to USB-C adapter, the Tab S4 will continue to work as a fully functional tablet, which will give users two screens for tasks. Multi-screen has been a hot demand for Galaxy tab users.

The newest tablet packs a 7,300mAh battery that allows 16 hours of video playback. Samsung Knox, the company's enterprise solution, will allow IT managers to tailor interface with their business needs.

Features from the Note series such as Samsung Live Message and screen-off memo have also been adapted to the Tab S4. The S Pen for the Tab has a different, bulkier but Montblanc-like smooth design compared to the pencil-like version for the Note series.

The overall tablet market has been in decline but tablets catering to professionals and the enterprise has been increasing, Samsung officials told ZDNet. The Tab S4 is aimed at offering the best for both work and play, they said.

Screen ratio of the 10.5-inch AMOLED display has been changed to 16:10 from 4:3 of its predecessor Galaxy Tab S3 for a more immersive visual experience, Samsung officials said. The four speakers on the device are tuned by AKG and Dolby Atmos sound technology, also an upgrade from the Tab S3.

The tablet, with the SmartThings app 2, can be used to control smart home devices. It also comes with Samsung Flow that connects it with other Samsung devices to transfer files, tasks, and notices. The Tab S4 can be changed to a photo album, calendar, or clock via its Daily Board feature.

Samsung has also launched the new mid-tier Galaxy Tab A 10.5. The tablet packs the same 7,300 mAh battery and Dolby Atmos sound technology as the Tab S4, but has less processing power and features a 10.5-inch LCD. It comes with a Kids Mode that offers a children-friendly interface with eight free apps aimed at kids. Multi User Mode will allow parents to separate accounts for them and their children.

Tablets
Samsung Galaxy S22 Ultra deal: Save up to $150