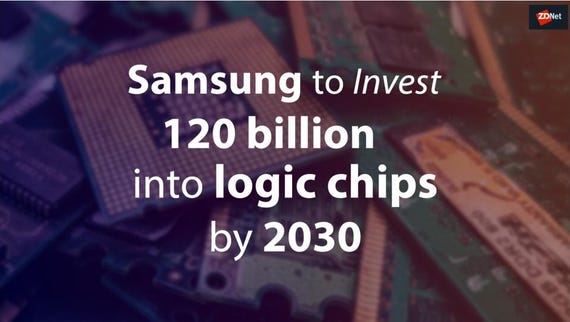 Samsung Electronics will invest 133 trillion won by 2030 to strengthen its logic chip businesses, the company has announced.

The South Korean tech giant said it aims to become the global leader in logic chips by 2030, just like it currently is in memory semiconductors.

Out of the total investment, worth around $115 billion, 73 trillion won will be earmarked for research and development and 60 trillion won in production infrastructure. Investments will average 11 trillion won per year. These will result in around 15,000 additional jobs, it added.

Samsung already invests over $20 billion per year in its semiconductor businesses, but these have mostly focused on memory and display devices so far.

It also said that it will collaborate with South Korean fabless companies, those who design semiconductors but don't have factories to make them, as well as design houses, or those who contract design chips.

System LSI and Foundry were originally under one roof, but the company divided them back in 2017 in an effort to expand them.

Samsung has deemed 5G wireless networks to be an opportune time to expand these businesses. The boss of its System LSI business, Inyup Kang, previously told ZDNet that 5G offers an unimaginable business opportunity for the firm. The company has already rolled out its own 5G semiconductor products.

The aggressive move in the next-generation network is an attempt for the South Korean tech giant to surpass its two biggest rivals for the global top spot, Intel and Qualcomm.

Its bread-and-butter memory business has helped Samsung clinch record profits for the past two years, but it is facing a downturn. This is partly the conglomerate's own doing, as the business' boss, vice chair Kim Ki-nam, has been in the forefront of expanding the company's production capacity to overwhelm rivals SK Hynix and Micron in a mini "chicken game", according to sources.

Amid the global economic slowdown, semiconductors are also providing a level of confidence for Samsung as other businesses such as mobile and display suffer, and the leadership plans to aggressively expand in the area, the sources added.

Intel, like Samsung, is the only remaining integrated device maker -- or semiconductor firms that can both design and manufacture their own chips -- and it has been the South Korean tech giant's aim to overcome it for decades. Intel, despite falling somewhat behind in the mobile market, is still the world's largest semiconductor in terms of revenue thanks to its control of the PC and server markets.

Qualcomm, on the other hand, has been the company's biggest frenemy besides Apple. The US chip giant dominated the 4G LTE chip market and has provided its processors and modems for the South Korean tech giant, but the two also fought over patent royalties. Samsung now produces its own modems and is attempting to become more independent from Qualcomm.

It faces an uphill battle going forward, however. Qualcomm and Apple recently made peace in their own patent lawsuit and next-generation iPhones will likely continue to use the chip giant's modems. LG, which has no capacity to make its own processors and modems unlike Samsung, is also closely allied with Qualcomm in 5G. Samsung sources say the company is "determined" to win the competition.

In contract chip making, it is competing fiercely with Taiwanese giant TSMC. Samsung this month announced that it has successfully developed EUV 5nm chip process. The race for smaller chips, which is pushing the boundaries of Moore's Law, is an attempt to clinch the big clients Apple, Qualcomm, and Nvidia for their respective next-generation chips for 5G and new Internet of Things (IoT) offerings expected in the next couple of years.

Samsung has promoted an executive tasked with reviving its mid-tier smartphones in the mobile business, as well as its chip boss who led the conglomerate's stellar semiconductor growth.

Samsung Electronics has begun production of its fifth-generation 256-gigabit (Gb) V-NAND with a data transfer speed of 1.4-gigabits per second (Gbps).

The new one-terabyte embedded Universal Flash Storage (eUFS) 2.1 -- which is enough storage for 2600 minutes of UHD videos -- will likely pack the upcoming Galaxy S10 with the largest internal storage...

Join Discussion for: Samsung to invest $120 billion into logic...