South Korean telco SK Telecom and US media giant Comcast have come together to form a global eSports company, the companies announced.

The joint venture, called SK Telecom CS T1, is named after the companies' initials as well as SK Telecom's eSports team T1. The company will be called T1 for short.

SK Telecom will be the primary shareholder, holding a 55% equity stake. Comcast and US hedge fund Highland Capital, meanwhile, will invest a combined $41 million to be the second and third largest shareholders, respectively. 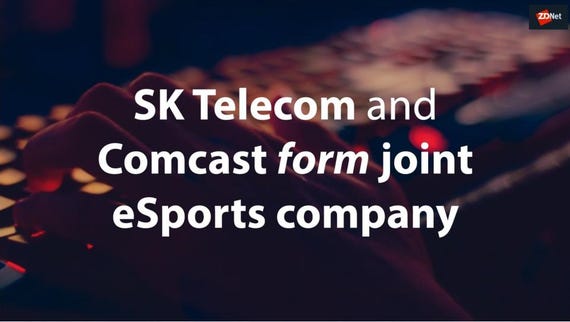 The venture, in total, is worth around 110 billion won, or $92 million. T1 will be based in Seoul, but will also have a regional office in Los Angeles dubbed T1 West.

SK Telecom already manages three eSports teams, but with the creation of the joint venture, the number of teams it owns will be expanded to 10 across seven gaming titles.

T1 will also capitalise on SK Telecom and Comcast's resources, such as their global networks and telecommunication and media technology, to produce and stream eSports content.

There are also plans for T1 to sell game-related merchandise and grow its sponsorships, advertisements, and broadcasting rights.

According to Goldman Sachs, the global eSports market will be worth around $3 billion by 2022.

SK Telecom showcased its VR games at Mobile World Congress this year, saying at the time that 5G networks would expand the sector.

The telco is not the only South Korean company that is looking to games to find new growth. Samsung earlier this year launched monitors and TVs that are specifically aimed at gamers with low input lags.

The companies reached download speeds of 1Gbps on a racing car moving at 130 miles per hour.

Completion of these technologies will allow quantum keys to be applied to commercial networks.

Want a job in video gaming? Look to these skills (TechRepublic)

Game developer job positions have decreased, while other roles in the field are booming, according to an Indeed report. Here are the skills employers want.