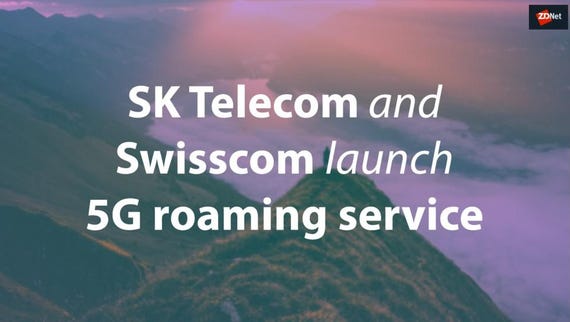 Subscribers to the South Korean telco that use a Samsung Galaxy S10 5G smartphone will be able to enjoy 5G roaming from Thursday onward, the telco said. SK Telecom will later commence a software upgrade to support the LG V50 ThinQ 5G as well.

The two telcos have been working on the roaming service since May.

Swisscom is Switzerland's largest mobile carrier with around 6 million subscribers and first partnered with SK Telecom for 4G LTE roaming back in July 2013.

Switzerland was one of the earliest in Europe to deploy 5G wireless services, rolling out its next-generation network on April 17. The country currently has coverage in 110 cities and towns, including major cities such as Zurich, Geneva, and Bern, the telcos said.

Switzerland currently has 99% LTE coverage and has a total of 11.23 million telecommunication users, which is 132% of its population.

Both South Korea and Switzerland carriers are focusing on sub-6GHz spectrum first rather than mmWave, making roaming between the countries easier.

The creation of a worldwide 5G roaming network will likely take longer than 4G LTE as it has been deployed in a variety of spectrums and smartphones that support multi-spectrum are yet to be commercialised.

South Korea rolled out 5G networks in April and secured a million subscribers during its first 69 days.

SK Telecom and Seoul metropolitan government will install 5G-enabled ADAS on 1,700 buses and taxis to develop a real-time HD map in preparation for autonomous vehicles.