Both ends of the mobile mid-tier duke it out -- one armed with modularity, the other with a stripped-down version of Android and a killer screen.
Written by Chris Duckett, Contributor on Nov. 22, 2018 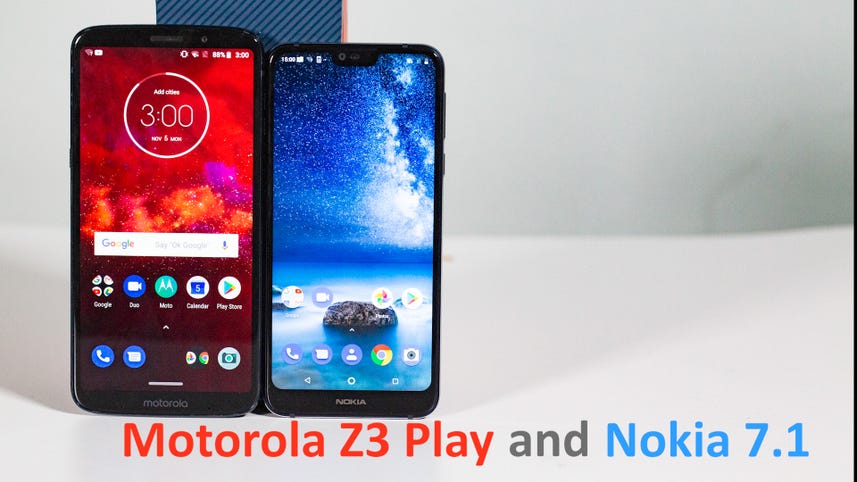 It's rare that a pair of devices based on the same processor happen to make their way simultaneously into the ZDNet Sydney office, but such a coming together happened when the Snapdragon 636-powered Motorola Moto Z3 Play and Nokia 7.1 handsets appeared in quick order.

Each represents a completely different take on what a mid-tier phone should be, and each sits at a different end of that tier.

In Australia, the Z3 Play is only available on Motorola's site for AU$800, while the Nokia 7.1 has found its way into retailers and is trading for AU$500.

On the spec sheet, the Z3 Play consistently edges it.

Both have the Snapdragon 636, a dual 12-megapixel and 5-megapixel rear camera with an 8-megapixel front camera, are capable of MicroSD card storage expansion, and are charged via USB-C connections.

In the case of Nokia, the panel it has dubbed PureDisplay is HDR-capable and claims to be capable of upscaling standard dynamic range content to high dynamic range in real time. In practice, this gives the Nokia a leg up in screen terms over the Z3, although it does have a notch.

If you are the sort of phone user who must have a headphone jack, then in this scenario, your only choice is the Nokia 7.1.

This is a category where both phones get it right with their different takes.

As I wrote about Motorola's approach to Android in December 2015:

Motorola in recent years has decided to mostly get out of the way of stock Android and let Google's operating system look and feel the way that Google wants it to. The good news with this approach is that when Motorola decides to add something to the software, it makes a good addition.

This approach still holds up in 2018 -- when Motorola makes an addition to the system, it is a good one. If phone makers learn the lessons of Motorola's approach, Android would have a lot less crapware and duplicate apps appearing on handsets.

As has become typical for the reborn Nokia brand, the 7.1 uses Android One, which is a pure Android experience with a couple of the goodies from Android Go kicked in. While the 7.1 has only 3GB of memory to play with, it handles Android One fine -- but there is a question about whether it could handle future Android One releases if Google cannot restrain the footprint of its OS.

All in all, both phone makers get full marks for their different, yet correct, takes on Android.

There is one exclusive feature that Motorola has offered for some time: Moto Mods. These are a range of accessories that affix to the back of the phone with magnets, and make its considerable camera bump a thing of the past.

Motorola has had this option for a number of device refreshes, and the functionality offered ranges from a battery pack to a projector, a 10x zoom camera attachment, and a gamepad. Typically, the cost is an additional AU$100 to around AU$400 in some cases.

For the purposes of our review, we only had the Incipio power pack that adds an extra 2,220mAh, but having tested a couple of the other mods in the past, a battery pack is the only one that makes sense. Retailing for AU$120, the Incipio pack does make the phone substantially heavier, but it does mean the phone can easily last a couple of days.

Armed with a Z3 Play and a battery pack, I was able to use GPS on a three-hour drive to a weekend camping spot, take a bunch of photos and videos, and make it back on Sunday evening without needing to worry about carrying a regular battery pack and cable around.

Since the pack is only attached by magnets, it is a snitch to slap on or rip off if you do not need the extra juice. For anyone entering the world of Moto Mods, a battery pack is an absolute must.

It's at this point that all the good vibes for the Motorola end. The Z3 Play costs AU$800, and is available officially via one avenue in Australia: Motorola's website.

At the time of writing, Motorola was offering any of its non-battery mods for free with the device. Previously, it had offered the projector or Hasselblad camera, which is a shame because in the United States, Motorola got it right the first time when it threw in a battery pack.

Given the battery pack is the mod you want, the cost is going to run close to or in excess of AU$900 pretty quickly.

The catch is that with the AU$800 price mark, this puts the Z3 Play up against the likes of the LG G7 ThinQ, which is an actual flagship with premium components.

A Moto Z3 Play with a battery pack is not value for money compared an LG G7 ThinQ and a nice dinner.

On the Nokia front, the 7.1 retails for AU$500 and is actually available in Australian retailers. It's a price point that makes the phone compelling, and in many ways, reminds me of the Google Nexus phones when they had been on the market for a while.

The Nexus phones were not the best phones available at the time, did not have the best silicon or camera, but were good enough and sold at a price that was hard to resist.

The irony of comparing the Z3 Play from a company that was once owned by Google, and the 7.1 from a company that only came to Android properly once Microsoft decided it was done with Nokia as a brand after consigning it to feature phones, and flogging it to HMD Global for $350 million, is not lost.

But perhaps after a long journey, Nokia is starting to deliver the Android phones that many of us candybar phone owners at the turn of the century always wished it would.

As for Motorola, it's hard to recommend over the Nokia, and almost impossible to find in Australia at any rate. It's a good device, and the mod idea is sound, but it is simply too expensive.

Motorola's latest smartphone has a lot of futuristic hype to live up to.

Motorola's Moto Z3: The first phone that can upgrade to 5G (TechRepublic)

The Moto Z3 features familiar hardware, plus the ability to add a modification that enables 5G access.

This comprehensive guide covers plans from leading smartphone vendors as the industry begins wide deployment of 5G mobile networks and devices that leverage them.

Google has figured out a way to make low light photography something I want to do more of.