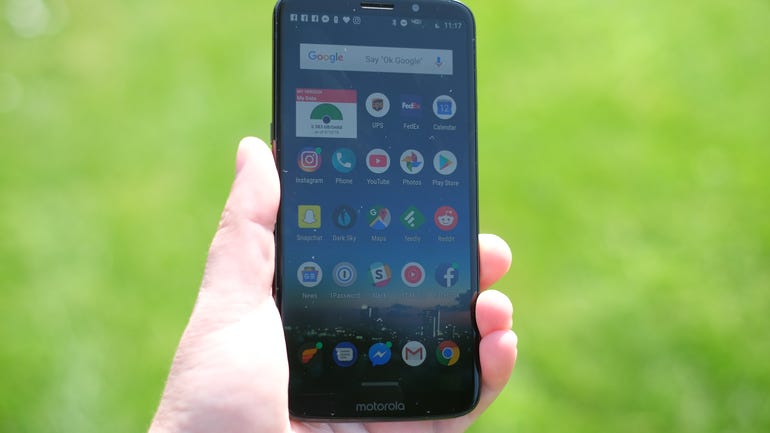 A couple of weeks ago, Motorola held an event at its Chicago campus, where the company unveiled the Moto Z3. The Z3 is yet another phone in the company's lineup designed to work with Motorola's accessory approach, the Moto Mod.

That last part is important, because the Moto Z3 is the currently the only Motorola device that will work with the newly announced 5G Moto Mod. By simply attaching what looks like an oversized battery pack, the Moto Z3 will switch over to Verizon's 5G wireless network. The only problem is, the mod -- and the network -- won't be available until next year.

So, what's it like to use a phone that's built with last year's hardware with next year's experience in mind?

Motorola somewhat locked itself into a generalized design for the Z line thanks to Moto Mods. The accessories are designed to fit on the back of every Moto Z phone, including the Z3, without the user having to worry about compatibility.

Because of that, Motorola can't drastically change the design. However, the company found a way to increase display size and use the increasingly common 18:9 aspect ratio on the Z3.

Also: What is 5G? Everything you need to know

By moving the fingerprint sensor to the right side of the phone, the display has been increased to 6.01-inches (up from 5.5-inches on the Z2 Force). Moto Mods released with the first Moto Z still fit and work with the Z3 without issue, as has been the promise all along.

The fingerprint sensor sits just below dedicated volume up and down buttons and is easy to find when gripping the phone with either hand. I had to register my left index finger and my right thumb, a weird combination if you ask me, in order to use the reader when naturally holding the phone.

A USB-C port on the bottom is the only port you'll find on the Z3. That's right, there isn't a headphone jack on this phone. There is an adapter in the box, however.

Also: 5G mobile: Arriving not with a bang, but a whisper

The left side of the phone is where you'll find the sleep/wake button, with the SIM card and microSD card slot found on the top of the phone.

On the back is a circular camera bump, and the familiar line of gold-colored pins used for the Moto Mod and phone to talk to one another.

Outside of the bigger screen and moved fingerprint sensor, the Moto Z3 looks a lot like the Moto Zs before it. But that was to be expected.

Motorola opted to use an older Snapdragon 835 processor in the Moto Z3, instead of the Snapdragon 845. Motorola explained this decision to me as a means to hit a price point. Using the latest processor would have upped the end price for customers.

Try as I might to fault Motorola here, I just can't. I understand the decision. Even though what appears to be the company's "flagship" device for 2018 uses a year-old processor, the overall performance is still smooth and responsive. Apps open without delay and scrolling is stutter free. On a geeky level, yes, I'm annoyed. But looking through the lens of the consumer, what's the issue?

With a 3,000mAh battery in the Z3, Motorola touts 24-hour battery life. During my testing, I opened Google Maps on the Z3, entered my home address, and started driving to Colorado from Waco, Tex. With added stops, the total drive time was around 13.5 hours. I started with the Moto Z3 unplugged and 100-percent charged. It wasn't until near the end of the hour eight that I had to connect a charger to the Z3.

Also: What 5G wireless devices will do that 4G cannot

In other words, with the screen on at 75-percent brightness, Google Maps constantly updating and moving my location, the Z3 lasted nearly 9 hours.

Outside of use as a dedicated navigation device, the Moto Z3 battery offered enough juice to get through a typical 14-hour day for me.

On the back of the Z3, you'll find two 12-megapixel cameras, one of which shoots in monochrome. Using the two cameras you can capture photos with blurry backgrounds, black and white photos, and everything in between. I found the cameras to do a good enough job, but not wow me by any means. It seemed to suffer the most in harsh lighting conditions, be it too much or too little light.

All this is to say, there aren't any major hiccups or issues with the Z3's performance. But there's also nothing worth calling out as impressive about it either.

Not all about 5G

Don't buy this phone for its 5G promise. Other than a few announced cities and a generalized timeframe of "early 2019," we have no idea when Verizon will flip the 5G switch. And even when it does, you have to be lucky enough to live in one of the initial launch cities. Currently, Houston, Los Angeles, and Sacramento have been announced as cities where Verizon will launch its 5G home broadband service, with no mention of a 5G wireless network.

Not only do we have no idea of when, and only vaguely know where, we don't know how much it's going to cost. Verizon is still finalizing price plans for 5G, and Motorola said the same about the 5G Moto Mod -- pricing is TBD.

Also: Almost half of US consumers will have access to 5G by 2023

Motorola and Verizon used the Z3, complete with its 5G upgradeability, as a means to be first to announce a device with 5G anything related to it. In that regard, the Z3 is a success.

As I already mentioned, don't let yourself get caught up in the 5G craze and buy this phone in anticipation of its eventual rollout. This phone was used as a marketing tactic to start the 5G discussion and Verizon at the same time.

The Z3 is a solid choice for someone who is a Verizon Wireless customer who wants an affordable and reliable Android device, with the option to add more functionality through Moto Mods. Outside of that narrow scope, the Moto Z3 is impressively mundane.

Take a break from work with the Moto Gamepad... SEE FULL GALLERY

The Moto X4 is a solid mid-range phone that will likely let you perform 80 percent of what you want on an Android phone at less than half the cost of a flagship.

Moto G5S Plus review: Get creative with the dual camera

https://www.zdnet.com/product/motorola-moto-g5s-plus/The Moto G5S Plus is the latest affordable phone from Motorola.

Moto G6 Plus review: A lot of handset for a competitive price