The figure is staggering, but so is what's at stake: A sizable portion of the $33B quick-serve pizza market (and the whole fast food universe)
Written by Greg Nichols, Contributor on Aug. 9, 2018 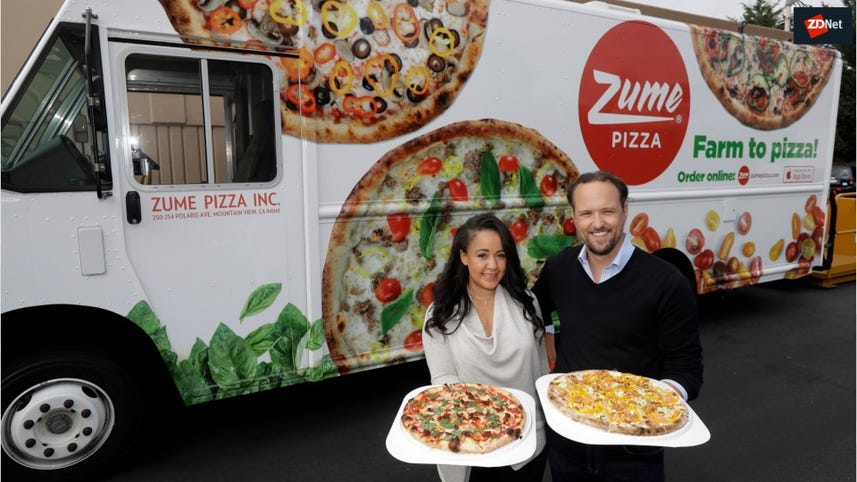 The startup is Zume Inc., which was founded in 2015 with a mission of rooting out inefficiencies in the $33 billion U.S. quick-serve pizza market.

Zume has been delivering pizzas from its flagship location in Silicon Valley. It employs industrial robots fine tuned to perform like pizzaiolos. The robots prepare the dough, spread sauce and cheese, and man an 800 degree oven.

Zume's pizzas finish cooking in ovens inside trucks en route to delivery. The company uses predictive analytics to figure out which toppings are going to be most popular in a given area and when demand for certain kinds of orders might surge -- for example, during a major sporting event.

SoftBank, which has its own robotics business in Aldebaran, is likely looking past pepperoni and pineapple. Zume could make a mint disrupting the pizza business, but at heart it's a perishable supply chain logistics company, and it could have ambitions in fast food at large.

By operating at maximum efficiency with a minimum of staff, Zume could be sowing a next gen version of the disruption McDonald's brought to the restaurant industry in the 1950s.

For now, though, the focus is the pizza industry, which has been gripped by automation fever of late. Domino's has been racing to automate urban delivery through a concept it calls the Domino's Robotic Unit (DRU) and a partnership with Flirtey, a robotics company that makes ground delivery drones.

Little Caesars has entered the automation race, also, most recently by applying for a patent for a pizza-making robot to take most of the crucial pizzaolo tasks away from humans.

The size of the discussed investment is all the more striking when you consider Zume currently operates just three trucks in a single local market.

But SoftBank is clearly vying for a big piece of on-demand food delivery. It recently led a $535 million round of DoorDash, the food delivery app.