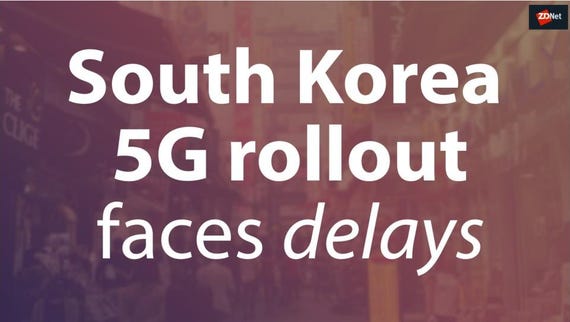 South Korea's initial plan to roll out 5G networks in March -- and become first country to do so -- will now likely face delays as industry players are not ready to meet the schedule.

Jun Sung-bae, the director of planning at the Ministry of Science and ICT, said in a press briefing that the country only wanted to roll out 5G networks when "quality was assured", and that it did not have to commence deployment by the end of the month. He also added that commercialisation may not occur in March.

The embarrassing possibility of delays comes after Minister You Young Min had told reporters at Mobile World Congress (MWC) that 5G networks would be rolled out on the last week of March.

The setback has been caused by multiple factors, including government and telcos failing to agree on an appropriate 5G price plan for customers, as well as a lack of readiness from smartphone manufacturers Samsung and LG.

SK Telecom, South Korea's largest telco, turned in its 5G price plan proposal earlier this month but it was rejected by the Ministry. The carrier turned in price plans priced at over 70,000 won ($62) per month, which the government said was too high.

In response, the telco said that it plans to launch more affordable plans as 5G subscribers increase.

LG is not yet ready to launch its first 5G device as it relies on Qualcomm for its 5G modem chips, but the American chipmaker will only begin supplying them in May when the next-generation network is scheduled to launch in the US. As such, LG's V50 ThinQ, -- which is its first 5G model -- is likely to be launched then instead, according to company sources.

The company is still in discussions with telcos to launch the phone in April, sources said.

The initial tight deadline is thought to be caused largely by the rise of China, which is challenging South Korea's dominance in smartphones and related hardware locally and abroad. Huawei is major vendor of 5G equipment to local carrier LG Uplus and has overtaken Apple as the global runner-up in smartphone sales.

Galaxy Fold with 5G launching in May in South Korea

Samsung Electronics will launch its foldable smartphone the Galaxy Fold with 5G in May in South Korea, the company's mobile boss says, and vows to sell more than a million units globally.

5G cybersecurity concerns and physical challenges: What you need to know (TechRepublic)