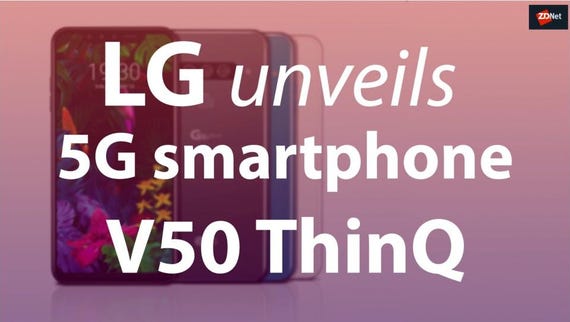 LG has unveiled its first 5G smartphone ahead of Mobile World Congress (MWC) 2019, hosting a launch event on Sunday night in Barcelona for the V50 ThinQ that's set to go on sale in spring.

The 5G smartphone is powered by a Qualcomm Snapdragon 855 processor with fourth-generation artificial intelligence (AI) acceleration and the Snapdragon X50 5G Modem, has a vapour chamber for better cooling, and comes with a 4,000mAh battery and a 6.4-inch OLED display.

It comes with 6GB of memory and 128GB of storage, with a microSD slot for up to 2TB of additional memory; a 16MP and two 12MP rear-facing cameras; 8MP and 5MP front-facing cameras; runs Android 9.0 Pie; and works on 3G, 4G LTE, and 5G networks.

The V50 is available in black, and will be launching with 10 major carrier partners across the US, South Korea, Australia, and Europe.

"The LG V50 is pioneering the 5G experience," LG said.

LG also introduced the dual-screen "companion" to the V50. The dual-screen version can be positioned at either 104 degrees or 180 degrees, and has a 6.2-inch FHD+ OLED display.

According to LG, the development of the smartphone would not have been possible without its partnership with Sprint.

Sprint CEO Michel Combes said the project with LG and Qualcomm had an "aggressive timeline", with engineers at all three companies working night and day to get it ready in time for early 2019.

LG had flagged back in August 2018 that it was working with Sprint on delivering the first 5G smartphone in the United States in the first half of 2019, following the launch of the carrier's 5G network.

LG on Sunday also unveiled the G8 ThinQ that had "advanced palm vein authentication" thanks to infrared sensors and the Z Camera. The likelihood of two people sharing the same palm vein pattern is one in 1 billion, according to LG, making it more secure than fingerprint recognition.

"More secure than fingerprint-recognition technology, LG's Hand ID identifies owners by recognizing the shape, thickness, and other individual characteristics of the veins in the palms of their hands," LG said.

"Simply placing a pre-registered hand in front of the front-facing camera for a split second is all it takes to unlock the LG G8 ThinQ and all its content."

The Z Camera also enables gesture control of the phone, including answering or hanging up calls, taking screenshots, switching between apps, and adjusting the volume via waving and pinching movements.

It also has 6GB of memory and 128GB of storage with microSD room for up to 2TB; has a 16MP and two 12MP rear cameras; packs an 8MP front-facing camera in addition to the Z Camera; comes in red, black, and blue; and runs on Android Pie.