Surface Studio shows up the iMac but won't unseat it

Microsoft's stunning posable desktop poses no immediate threat to Apple's mainstay desktop, but the expandng Surface family is starting to circle Apple's wagons at the high end.
Written by Ross Rubin on Oct. 27, 2016

Microsoft introduced the original Surface to compete with the iPad. And the Surface Book was designed to leave the MacBook Pro in the dust. Now, with its new all-in-one desktop, the Surface Studio, it is setting its sights on the iMac.

While laptops represent where the bulk of the PC volume and revenue is today, Microsoft taking a swipe at Apple's mainstream desktop is symbolic as the iMac marked the beginning of the hardware renaissance at Apple. It's also been something of a vulnerability for the company as its basic design -- while slimming down in 2012 -- has not cosmetically changed much since 2009.

That's not to say the Surface Studio breaks completely new ground. Indeed, with its chrome arms and slim display, the Surface Studio updates some of the design philosophy of the old Luxo lamp-like iMac G4 and mixes it with the benefits of previous Windows desktops with descending screens such as the HP Envy Rove and Wacom Cintiq.

In step with Surface's mission to bring out the best of Windows, Surface's descending display has been optimized to take advantage of the operating system's touch capabilities, much like its native resolution of 192 dpi has been tuned to double Windows native screen resolution of 96 dpi. Given Apple's aversion to putting touchscreens on the Mac, much of the Surface Studio's design advantage would be lost under macOS. 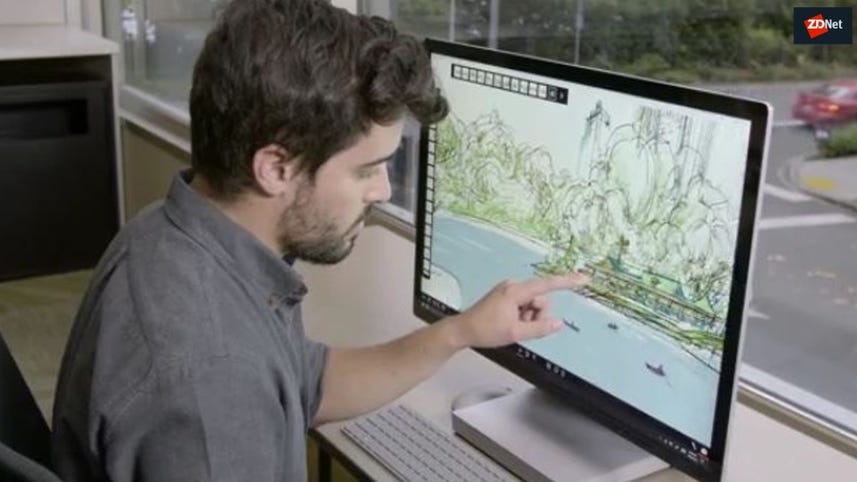 However, while Microsoft acknowledges that those demanding the highest levels of, say, rendering horsepower will gravitate more toward beefy towers, it has packed its signature desktop with graphics horsepower that far surpasses that of the historically lagging iMac.

The Surface Studio boasts a leading mobile graphics processor, extending and surpassing the GPU embrace it has exhibited with its new Surface Book configuration. Indeed, while the product, with its switchable color profiles optimized for photography or video editing, is clearly designed for professionals, Microsoft notes that the PC will be one of the few platforms to support 4K game this fall and has equipped it with the Xbox wireless controller protocol for good measure.

Microsoft is tearing another page from Apple's playbook by matching a new device to a new method of input. However, it hasn't seen the need to introduce a whole new device class to do so. The Surface Dial accessory stands on the shoulders of the Griffin PowerMate but blends in a bit of manipulation magic demonstrated in the early days of the original Surface table computer. Placed alongside a keyboard or mouse, it's simply a convenience. But when placed on the Surface Studio display, it opens the door to new and fluid interaction methods, particularly when used in conjunction with the Surface Pen.

Indeed, the Surface Studio is a real tool, not a mere statement or concept PC. That said, Microsoft's $3,000 all-in-one with the stunning display doesn't have quite the same mission as the iMac, Apple's mainstay desktop that starts at almost a third of that price.

While Microsoft has seen its Surface business grow at a healthy clip, it has not done so well with its downmarket products, notably the non-Pro Surfaces. Even switching to Windows 10 from the abandoned Windows RT didn't change the game for that product. Besides, attempts by Microsoft to carve into a less exclusive pricing segment, particularly for laptops, could raise even more ire from licensees.

But while Surface Studio may not be an iMac killer across the board, it is continuing to validate the Surface team's design and engineering prowess at the high end of the PC market. That may not be enough form a halo effect around the entire Windows ecosystem, but the cumulative effect could begin to steal more of the shine from Apple in general.