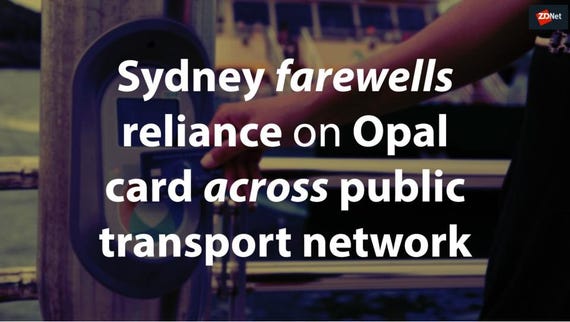 This means that all buses will now accept payments via the PayPass or PayWave function on either debit or credit cards -- including smartphones and any smart devices that have NFC payment capability -- in lieu of using an Opal card.

The trial was then extended to Visa and American Express cardholders in March 2018, allowing the use of all three card types on all ferries and one light rail service.

Must read: Public Transport Victoria in breach of Privacy Act after re-identifiable data on over 15m myki cards released

Since July 2017, nine million contactless journeys have been taken on the Opal network. Of these, 1.4 million have been unique contactless credit and debit cards.

"We are now travelling down an exciting new path towards frictionless end-to-end journeys with just one payment for both private and public transport," senior vice president and managing director for Cubic in Asia-Pacific Tom Walker said. "Contactless is moving Australia towards what we would call 'transport nirvana', allowing commuters to access a seamless, integrated multi-state transport network with no prior knowledge of the local ticketing systems."

In announcing the function was coming back in July, the Commonwealth Bank of Australia -- which developed the core payment infrastructure -- said it would extend the benefits earned by Opal users to those using their own accounts.

Daily, weekly, and Sunday travel caps are now in line with Opal caps; the weekly travel reward of half-price travel after completing eight trips can now be earned; Opal transfer discounts will apply; and off-peak pricing for train travel will also be extended to those not using an Opal card.

"What was previously a transit gate is now essentially a payment terminal, demonstrating yet another example of how technology is enabling faster and more convenient experiences for the community and smarter, more connected cities," CBA's executive general manger of Business Customer Solutions Clive Van Horen said.

Data61 is helping the state prepare for a road network that will be used by autonomous vehicles.

Join Discussion for: Sydney farewells reliance on Opal card across...