I know that some tech companies like to pretend they've created something, um, innovative when they've merely changed its shape, its colors, or made it roll out of a box.

AT&T, though, seems to have taken this concept to slightly absurd heights.

It released some updated phones that sported a 5G E icon.

Those who viewed these phones must have been mightily impressed that AT&T was already offering such an exalted level of connectivity.

You might imagine, therefore, that the carrier's rivals took one look at this and were forced to snort.

T-Mobile drifted onto Twitter and offered a little movie, showing how it was now offering 9G.

The 9G logo is a little inelegant, but it makes the point. 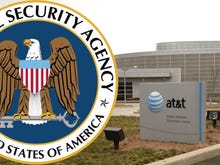 AT&T: We don't have to disclose any NSA co-operation, not even to shareholders The cellular giant says any such co-operation with the U.S. government in its mass surveillance operations would almost certainly be classified, despite concerns from shareholders.

Indeed, I can imagine that someone in T-Mobile's marketing department is wondering whether to produce stickers that customers can apply for themselves.

It does seem a touch tawdry that AT&T is offering this apparent attempt at marketing subterfuge. I contacted the company to ask why it had taken this step, and will update, should I hear.

T-Mobile, though, isn't the only AT&T rival that's offered commentary.

Verizon, in a step befitting its highly serious image -- even when it tries to be funny in ads, it's a little gauche -- posted a somber message from its CTO Kyle Malady.

Sounding almost Churchillian, Malady wrote: "The potential for 5G is awesome, but the potential to over-hype and under-deliver on the 5G promise is a temptation that the wireless industry must resist."

Because it's not true? Well, yes.

Malady continued: "If network providers, equipment manufacturers, handset makers, app developers and others in the wireless ecosystem engage in behavior designed to purposefully confuse consumers, public officials and the investment community about what 5G really is, we risk alienating the very people we want most to join in developing and harnessing this exciting new technology."

He does have a point. People do get bothered by manifest mendacity. Although, these days, perhaps not as much as they should.

Worse, AT&T has a little form, as they say in British criminal circles. In 2012, it claimed the iPhone 4S was a 4G phone when that wasn't quite the case.

Good marketing is supposed to make people feel good, rather than disappointed.

Perhaps AT&T hopes that merely placing the 5G icon in the corner of some phones will make customers feel they're a little ahead of their friends.

Until, that is, they use the phone and realize that nothing has changed.

It doesn't take an expert to assert that 5G will be a major theme of this year's Las Vegas show. But will the 5G devices on display there soon need to be replaced with "real 5G" devices?

AT&T is working on hospital and stadium use cases for its newly launched 5G network, as well as announcing that it will be connecting Toyota and Lexus cars with LTE between 2019 and 2024.

The big themes that will emerge at CES 2019 are really like installments on broader business trends. We aim to separate the fact from fiction.