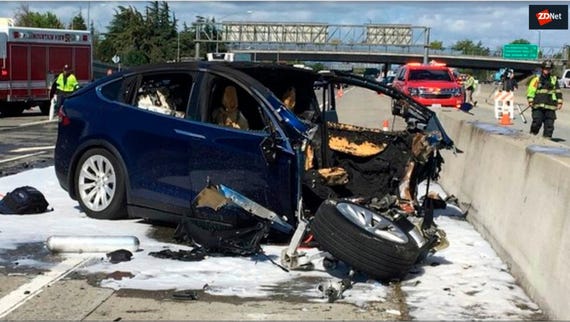 The parents of one of two Florida teens who burned to death in a Tesla after it crashed last May have sued Tesla, alleging the vehicle's battery was defective and that Tesla had wrongly removed a speed limiter set to prevent it exceeding 85mph.

The 2014 Tesla Model S, driven by its owner, 18-year-old Barrett Riley, was traveling at 116mph when he lost control of the vehicle, which crashed into a wall, hit a light pole on the other side of the road, and then burst into flames.

Riley and his passenger, 18-year old, Edgar Monserratt Martinez -- whose parents filed the suit against Tesla on Tuesday -- died as a result of injuries sustained during the crash.

Corboy & Demetrio, the law firm representing Martinez's family said in a statement that the suit alleges the battery was unreasonably unsafe and that Tesla failed to warn buyers of the vehicle that the battery was in a dangerous condition.

It also accuses Tesla of negligence because it removed a speed limiter that prevented the vehicle from exceeding 85 mph without the consent of Riley's parents.

"The Tesla S battery was prone to extremely intense fires incapable of being timely extinguished," the law firm said.

The complaint, obtained by Ars Technica, notes that in March, two months before the crash, Riley was caught speeding at 112mph. His father subsequently demanded that Riley have a speed limiter installed to prevent the car exceeding 85mph.

Tesla is said to have installed the limiter that month, but the complaint alleges that Tesla in May "improperly removed the 85mph speed limiter/governor without the permission and consent" of Riley's parents.

The lawyers argue that had Riley's parents known that the limiter had been removed, they wouldn't have allowed Riley to drive the vehicle.

The complaint also alleges that the Tesla Model S's batteries were "inherently unstable and subject to explosion and spontaneous fire". The batteries were also "inadequately protected", while the vehicle itself was "prone to extremely intense fires incapable of being timely extinguished".

The law firm's statement notes that there have been at least "a dozen worldwide reported cases of Tesla S batteries catching fire in collisions as well as while stationary in the past five years".

US National Transportation Safety Board's (NTSB) preliminary investigation into the crash found that parts of the Tesla's battery had separated from the vehicle.

After extinguishing the fire with 300 gallons of foam and water, the battery reignited as it was loaded on a truck for removal. It reignited again after it had been taken to a depot.

Tesla said in a statement: "Our thoughts continue to be with the families affected by this tragedy. Unfortunately, no car could have withstood a high-speed crash of this kind. Tesla's Speed Limit Mode, which allows Tesla owners to limit their car's speed and acceleration, was introduced as an over-the-air update last year in dedication to our customer's son, Barrett Riley, who tragically passed away in the accident."

Another Tesla battery reignites after being extinguished at a crash scene.

It also slightly tweaked the pricing and options for dual-motor AWD variants.