Microsoft's researchers are creating smart fabrics that can identify objects they come in contact with.
Written by Daphne Leprince-Ringuet, Contributor on Oct. 29, 2020 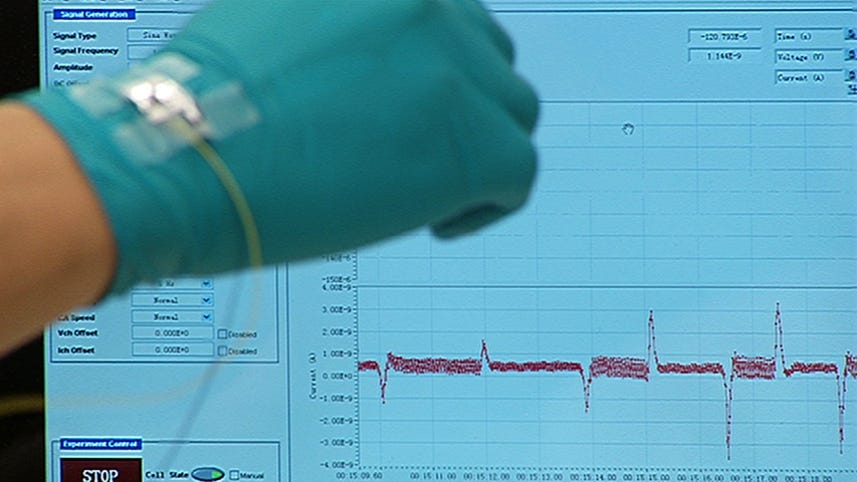 A pair of jeans reminds you that you forgot your battery-low Airpods in the back pocket. Or a tablecloth notifies you that you haven't picked up your credit card before leaving the house. These are among the futuristic applications that Microsoft's engineers have in mind for a new technology they are developing in the field of smart textiles.

Dubbed Capacitivo, the project's objective is to create fabrics that can identify the objects that they come into contact with, thanks to a recognition technique known as capacitive sensing. The method, which is already known among electrical engineers, relies on electrodes detecting and measuring the changes in electric charges when contact is made with a given object.

Combining capacitive sensing with AI, Microsoft's researchers have been able to create fabrics that can recognise non-metallic objects like foods and liquids, and typical household items such as books, bowls or candles. The results, so far, have been convincing, with Capacitivo making accurate identifications 94.5% of the time in tests involving 20 different objects.

Although the system struggled to differentiate between different types of liquid -- not always successfully telling beer from milk -- Capacitivo was nevertheless able to establish whether a container was full or empty, and even whether the soil was dry or wet for a small tabletop plant.

Using the technology, a smart tablecloth could, therefore, remind a user to water their plants. Many other applications could be imagined for Capacitivo. "A desired action can be triggered," the researchers said. "For example, a smoothie recipe can be suggested to a user based on what fruit or vegetable the user has inside a basket, detected through its cloth lining."

The technology could also gauge how much drink is left in your glass and automatically update your diet tracking app, or remind you that you have left your empty bowl of soup on the table for too long.

Microsoft's team have demonstrated the feasibility of Capacitivo in a proof-of-concept prototype comprising a 12x12 grid of electrodes, organised in rows and columns, and attached to a piece of fabric. When a non-metallic object makes contact with the electrodes, an electric displacement is created within the object, the amount of which varies depending on the material. The electric displacement changes the charge stored in the electrodes, altering its capacitance. Objects can, therefore, be detected or recognised based on the amount of shift observed in the measured capacitance.

In addition, the rows and columns that connect the electrodes enable a bigger picture to be established, by reflecting the overall shape of the contact area of the object on the entire piece of fabric.

"Our approach is unique in that we combined both mutual and self capacitance in a single package, to recognize an object based on the material and shape of the contact area of the object," said the researchers.

The data obtained is then fed into a machine-learning system, which has been trained with the various patterns of electrode reaction to different objects. The algorithm's high degree of accuracy, as observed in the first tests, has given the researchers confidence that the technology can be leveraged for various useful new applications.

For example, a smart tablecloth could recognize a credit card placed on the table and automatically fill in card information when a user registers or shops at a website for the first time. In the kitchen, Capacitivo could also recognise which ingredients are placed on the counter, and nudge users about the order and timing in which those ingredients should be added to a dish that's being prepared.

Microsoft is pitching the technology as a way to "make fabric aware of its context of use", rather than reacting to human actions. According to the engineers, this is what sets the technology apart from other initiatives in the smart textile field, such as Google's Project Jacquard, which connects items of clothing to wearers' smartphones.

Earlier this month, the Search giant unveiled its latest Jacquard release, a smart backpack that controls music and snaps selfies with a pat of the strap.

How to protect your new AirPods Pro from scuffs and damage

How to protect your new AirPods Pro from scuffs and damage

How to set up your AirPods Pro 2nd Generation

How to set up your AirPods Pro 2nd Generation