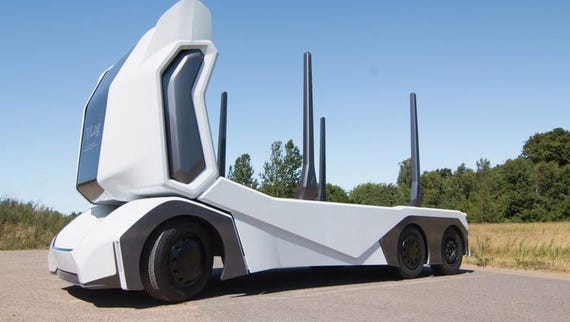 Hot on the heels of grocery giant Kroger's announcement that it will begin testing last-mile autonomous delivery using Nuro vehicles comes a surprising public debut from a scrappy autonomous driving startup that so far has operated mostly in the shadows.

AutoX, which was founded by a young Princeton Professor named Jianxiong Xiao (Professor X to his students), has announced it will begin delivering groceries via its L4 autonomous vehicles in San Jose, with additional public trials to follow.

Unlike most deep-pocketed self-driving companies, which use laser arrays and a bevy of sophisticated sensors in their autonomous platforms, AutoX uses inexpensive cameras and relies on its AI smarts to navigate the world around it (Tesla has also forsworn LiDAR in its Autopilot mode).

AutoX is partnering with GrubMarket.com for its new grocery delivery service. A temperature controlled AutoX vehicle arrives with groceries and pops the trunk. Unlike Nuro, which was founded by two former Google engineers, AutoX is using OEM consumer vehicles retrofitted with its technology.

"We're very excited to launch the first autonomous grocery delivery and mobile store service in the heart of Silicon Valley with self-driving vehicles on the road," said AutoX Founder and CEO Jianxiong Xiao, who was the founding director of Princeton's Computer Vision and Robotics Labs before the leaving the school in 2016 to found AutoX. "It's the first step of our mission to democratize autonomy, and is a testament to our cutting edge AI and all its potential capabilities."

Also: How 5G will drive down the cost of robots TechRepublic

The notion of democratizing autonomous driving is embedded deep in AutoX's DNA. It's a rare bootstrapped company in an ecosystem dominated by the likes of Uber, Intel, and Google.

Jianxiong started his company with modest seed funding after moving his family from Princeton, NJ, to Silicon Valley in 2016. His value proposition was that inexpensive cameras paired with the right AI would be enough for safe L4 autonomous driving. His company has been operating in stealth, although a California DMV filing to test self-driving vehicles put him on the industry's radar.

Behind the scenes, Jianxiong's computer vision bona fides (he's an all-star in the field) have helped him attract major academic talent.

"Highest safety and lowest cost, this is where our key technology lies," says Jianxiong. "With a diverse team of research minds from the likes of MIT, Stanford, CMU, Berkeley, along with engineering talent from Google, Apple, Microsoft, Amazon, and Ford, AutoX is determined to make a mark on the autonomous driving industry."

Beating its bigger competitors to market with L4 urban delivery ensures his company has already done that. Whether AutoX will continue to field the pace car for the sector remains to be seen, but in this Silicon Valley tale of David vs. Goliath, it's a rarity to watch the little guy land the first blow.

Join Discussion for: This scrappy self-driving upstart is about...