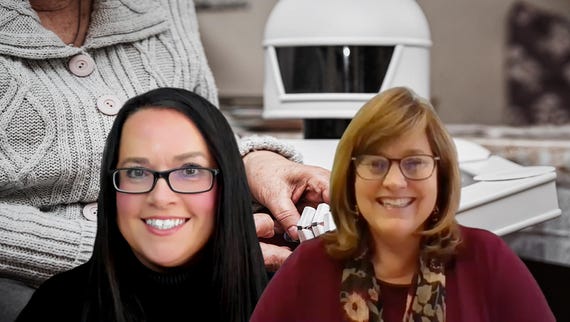 At CES last week, Mobvoi announced the TicPods 2 Pro wireless earbuds. They are one of the more interesting headsets I've tested recently with a design very similar to the original Apple AirPods.

Most of the Bluetooth fully wireless earbuds I use are designed for exercise and are tested while running outside. However, despite the IPX4 water-resistant rating of the TicPods 2 Pro, the universal fit with no customizable tips makes these earbuds best for commuting, office work, or when not moving around a lot. There are some unique features and those who have been happy with the AirPods may like an option priced about $20 less.

The TicPods 2 Pro retail for $139.99 in Navy, Ice (white), and Blossom (pink) colors. Unlike the Apple AirPods, there are some advanced AI features in these earbuds, five minutes of charging gets you an hour of playback, and they are safe to use in the rain with IPX4 water resistance.

The retail package includes the two wireless earbuds, a charging case with an integrated battery, and a short USB-A to USB-C cable. There is no support for wirelessly charging the battery/carrying case, but it is great to see the standard USB-C port and ability for fast charging.

I was sent the Navy color for testing and the case is a matching soft Navy blue color. The top of the case is textured and it is one of the smallest and sleekest headphone cases I have seen, making it very easy to slip into a front pocket and carry with you at all times.

There is a pairing button on the top next to the earbud compartments, under the lid. Your phone should recognize the earbuds, but you can always use the button to activate pairing too. There are small indicator lights on the front of the case and a standard USB-C port on the back for charging.

Each earbud rests in a compartment designed to perfectly hold each one. They rest along the length of the carrying case, one positioned above the other. The small charging case itself weighs in at only 29.5g with a 390mAh battery inside.

A Qualcomm QCC5121 chipset is inside each earbud to provide high-quality audio with reduced power consumption. These are some of the lightest earbuds I have ever tested, but the battery life is still near solid.

The earbuds are identical in design with two mics positioned on the back of the earbud and one down at the bottom of the stem to help provide a solid calling experience. The stem itself is touch-sensitive so you can slide up and down the stem to control volume. Long press (smart assistant and call refusal) and double-tap (skip songs, answer, or end calls) options work right along the stem of the earbud.

Unfortunately, the touch controls seem to be missing an obvious option, the ability to tap once to activate play/pause. It's a bit inconvenient to activate the smart assistant to play/pause the music. Mobvoi TicHear is supposed to let you perform some basic functions via direct voice commands without any wake word activation, but it was rare when this function actually worked for me.

Unlike many earbuds built for exercise, these buds are designed to rest on the lower part of your ear. They stay secure while you are sitting or walking, but can fall out with lots of head movement since they are not pushing against any sides of your ear to maintain a secure fit. This means I could never run with them, but they can also be worn for many hours with zero discomfort. Others may find them acceptable for exercise since we all have different ear configurations.

To activate your wireless assistant you speak "Hey Tico". This can be set up for Bixby, Google Assistant, or Siri with Siri being the only option on an iPhone. In my experience, you had to have the Mobvoi Android app up and running for this function to work. Hey Tico worked well at launching Siri on the iPhone.

The Mobvoi software, formerly Ticwatch, is available for both Android and iOS. The software lets you toggle various settings, such as invoking the Hey Tico phrase, ear detection playback, aptX HD audio, equalizer settings, firmware updates, and much more.

The software also provides you with battery status figures for each earbud and the charging case. I found that the software had to be open for some functions to work properly, which was a bit frustrating and limited my experiences.

The music experience is excellent on the Mobvoi TicPods 2 Pro and I could never have the full volume level up on either the iPhone or Android phones as it was just too loud. Even at that loud volume level, the music was crisp and clear, which was a bit surprising for such a small earbud that didn't even create a full seal in my ears.

The case is well designed and lightweight with ultralight earbuds. This contributed to easily carrying the TicPods 2 Pro everywhere while also making it a pleasure to wear them for hours on end.

The performance of the TicHear voice commands, or lack of performance actually, was frustrating as this is one function that sets this headset apart from others. That said, the volume slider action and phone call gesture controls were great. I found the nod and shake head gestures to be accurate for phone calls and this is especially useful if your hands are busy when a call comes in.

The headset is not inexpensive, but the audio performance and design justify the price. I expect a software update can improve the TicHear direct voice commands. These commands are not essential, but if this experience cannot be fixed then some kind of touch control gesture to play/pause music is essential.

In addition to outstanding music playback, calls sounded good on the headset with callers mentioning these sounded better than other headphones I've been testing recently.