I once called Uber the "worst company" in Silicon Valley. Today it's one of the bravest.

The San Francisco, Calif.-based ride sharing giant, a company worth upwards of $68 billion, might be known as the largest private-sector startup going today. But to others, it's known for its downright hostile, unethical, borderline disgusting behavior, attitude, and ethic towards its users, reporters, and even its own staff. 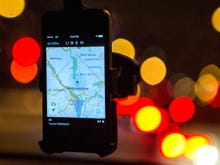 Uber served data on over 13 million users to US regulators The multi-billion dollar ride-sharing company included a warrant canary, stating that it had not received any national security demands.

And yet just a handful of months since its latest indiscretion -- a mere $20,000 fine that it could have recovered from in minutes -- it scored top-marks on a leading privacy group's privacy and transparency report.

The Electronic Frontier Foundation's annual "Who Has Your Back" report put Uber and car ride sharing service rival Lyft in the lead, far ahead of TaskRabbit, Postmate, and Getaround, which scored zero marks. Today, the company was commended by the privacy group for "taking steps to facilitate transparency and user privacy." Uber requires warrants and court orders -- not subpoenas, has a transparency report (and warrant canary), and promises to inform customers wherever possible when the feds come knocking at its doors.

It's a remarkable turnaround effort, given that just a couple of years ago Uber was "digging up dirt" on journalists, sabotaging its rivals, had a string of badly-behaved drivers (all while treating their drivers fairly poorly, sparking protests), and not to mention that old nugget of raising prices during natural disasters and emergencies.

And perhaps worse of all, it misused sensitive data through its all-seeing eyes of its so-called "god view."

There's no word on when Uber will graduate from "unicorn" land -- that is, startups that are ballooning in billion-dollar size -- into the public market.

But given how important privacy is in the wake of the Edward Snowden affair, and how new and unpredictable the sharing economy is, it's not all surprising that Uber is capitalizing by pushing privacy. Without it, any lasting hopes of riding the public market waves would shatter, given that a single negative press day can bring down a company's share price by points and digits at a time.

It's not such a bad thing that privacy is now becoming a commodity in startup-ville. But it's not easy to do. Even with the might that Apple has, protecting its users can be an uphill struggle against the goliath of the all-powerful US government.

Uber's proactive privacy push is, for its size, admirable. It's certainly a damn sight better than where the company was two years ago.

It's good to see Uber finally grow up. Let's see if it can keep going.