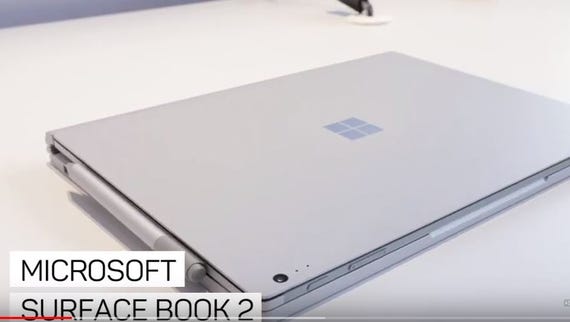 Peter Kyriacou was the lead program manager for Microsoft's original Surface Pro tablet and now heads up the program management team for all Surface devices. Prior to joining Microsoft, he was a senior program Manager at Sonos.

ZDNet caught up with Kyriacou at Microsoft's Future Decoded event in London to delve into the decision-making behind the devices.

Are you intimately involved in the planning and execution of new Surface products?

Yes, we do the roadmap, and then when the program kicks off we help scope the project and manage the schedule. Surface Pro 1 [in 2013] was my first product, and since then I've been working on the Pro line and the Book line. I still have an original Surface Pro, and it runs great, but we've done a lot in five years.

Five years ago, if you asked a creative professional what mobile devices they wanted, they'd probably choose Apple -- MacBook Pro and maybe an iPad too -- without hesitation. Now Microsoft's Surface products are serious contenders in this market. What do you see as the key factors driving this change?

Let me give you an example: when we worked on the Surface Pro 1 we had a Wacom pen and were running Photoshop. So we went to Adobe and said "We're making this device, and we want Photoshop to look great", and then we tweaked basic things with them, like how icons show up so that people can use a pen on a small device. Look how far we've come: now it's intuitive -- people pick up a Surface, log into Creative Suite or Office, and can use a pen super-easy. That's the trajectory we want to continue: how do we make our hardware a 'stage' for software? Ideally, we want the hardware to fade into the background, and the software to come to life -- and, more importantly, for the user to get into the flow.

The Dial is the latest example of integration between pen and touch: we've just announced further integration with Photoshop, which brings shortcuts to your non-dominant hand, so you can be in there painting with a brush and change the brush size or colour without having to break your flow to go to a menu.

Is part of the problem for Apple the bifurcation of the OS experience -- with pen and touch on iOS but not on macOS?

It's hard to knock Apple, because they're a great company and they make great products, but we started early on with Windows 7 to make touch part of the main OS, and you get to a place where you're not having to think what device you're on or what mode you're going to use. Touch is the start, but there's also great keyboard and mouse, and trackpad has been another main focus for us as well. Even the ability to attach a keyboard to a tablet: when we started off, with the Surface RT and Surface Pro, the focus was 'how do we make someone more productive on the device?'. So, it's typing experience, trackpad experience, pen, and leaning into that in the future -- how do you make sure voice is ubiquitous, independent of the machine that you're on?

The Surface business is now generating around $1 billion in revenue per quarter: are there any market segments where the devices have seen particular traction?

There's a pretty good distribution between consumer and commercial, and we're seeing growth in the commercial area -- especially as you lean into the modern workplace and how people are being productive on their devices. Creatives have definitely been our lead, but you see the devices start to trickle across -- into the C-suite and then to employees across the board. We have data that shows that as the new generation of milliennials join companies, the device you give them matters to them...and we've noticed that they feel more important and gratified when they get a Surface device.

You talked about making the hardware 'fade into the background', hiding the nuts and bolts of the design as much as possible. But there must be a trade-off in terms of accessibility and repairability -- the iFixit teardown reports and scores for Surface devices are pretty critical in this respect, for example.

When someone is shopping for a laptop, we look at the trade-offs they typically have to make. With Surface Book 2, for example, we looked at the axes that are important to the customer and tried to maximise every one of those -- along axes such as battery life, performance, screen size and pixel density -- without adding extra weight. We're really proud of the design decisions we made in terms of maximising all those things.

Over the years, various issues have arisen with Surface devices -- cooling, fan noise, wi-fi connectivity, sleep/wake and so on. Presumably it's a constant battle to fight all of the trade-offs involved?

With latest Surface device, Microsoft opts for a business-first approach Microsoft's newest member of the Surface family arrives in about a month, but don't look for it in the usual retail outlets. Initially, the Surface Pro with LTE Advanced will be available exclusively for businesses. Here's why.

We've learned a lot in making our own hardware over the past two years, and we've come a long way in terms of quality. We really proud of the launch, in June, of the Surface Laptop and the new Surface Pro, and how well they performed out of the gate. And you'll see, on Surface Book 2 as well, that the changes we've made in our processes have elevated the quality of our products.

I'm sure you won't be surprised if I mention Consumer Reports, which pulled its 'recommended' ratings from the Surface Laptop, Surface Book and new Surface Pro back in August. Microsoft responded to the reliability survey results at the time, but what's the current state of play?

We respect Consumer Reports and what they do, but we did question their methodology -- in terms of how they went about their survey. It went over a couple of years, and the method of surveying that they did -- asking users if they've had an issue with their device -- we don't think truly reflects users' experience of what we'd call a failed device. We've been talking to them, and we value what they do, but their methodology is in question with us. We're running a business, and we value our customers, and quality is rampant throughout our organisation -- not only in our functional and reliability testing departments but it's also in our design DNA.

Of course, on the other side of the coin there's the JD Power tablet satisfaction survey, where in 2017 Microsoft Surface came top for the first time...

We also do something called NPS (Net Promoter Scores), where our NPS is probably the highest we find on Windows devices. That's been great to see, especially on Laptop and Pro devices. 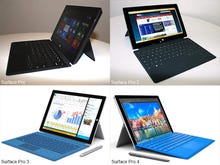 Surface Pro: The evolution of Microsoft's hybrid tablet PC Since its debut in February 2013, Microsoft's Surface Pro has developed into an exemplary tablet/laptop-replacement device, and also inspired a thriving 'clone' market. Here are some of its key evolutionary stages.

What's Microsoft's thinking on introducing new technologies to Surface products? It took a long time for USB-C to make an appearance, for example, and now it coexists with USB 3 and the proprietary power/data connector: is this a recipe for confusion, and will consolidation happen going forward?

That's a good question. We started the current power connector with Surface Pro 3, and it was the first to deliver power, data and video over one port. Now we have USB-C, but one thing we have with the Surface connector is the magnetic connection, which is something you don't get with USB-C: we've seen a lot of complaints about that on devices that are all-in on USB-C. The other thing is a consistent charging experience: sometimes with USB-C the rate of charging will vary depending on the adapter, whereas the consistency of the charger we supply out of the box is great. We also kept that connector on our products because we have a lot of customers who are invested in our docks, and want a consistent experience with a dock you know will work. That's something we're really proud of.

It's a similar story with LTE: the Surface 3 aside, mobile broadband has taken a long time to appear on the Surface range. Was it customer demand or technical reasons that tipped the balance with the new Surface Pro with LTE Advanced?

It's kind of a merging of both. The form factor has allowed us to deliver a full Core i5 processor with LTE, without compromises on battery life or thickness, or construction in terms of where you put the antennas. We made small adjustments to the antenna window, in terms of how the case is constructed, but from a display and bezel perspective it's really a great design.

But there isn't a Core i7 LTE model, because a fan is still needed and that occupies the space for an LTE modem. Do you expect complaints about that?

People will always find something to complain about on the fringes, but for the core customer who's been asking for it, delivering that Core i5-7300U part with HD Graphics 620 -- that's our number-one SKU, and one of our most productive devices.

Turning to the product-creation process, how unique and important is it to have all of your design, prototyping and engineering capability under one roof, in Building 87 on the Redmond Campus?

It's fantastic. What happens in that space is, we have a team culture that says 'fail fast'. In other words, you generate about 999 ideas before you get that good one. How do you have bad ideas and fail fast? What we do is, in that small space -- I call it 'small', it's actually over 100,000 square feet -- engineers, designers and testers are working together, so an engineer can have an idea in an afternoon and get a prototype made by the next day.

Let's say you're trying to make a really thin device and you have a certain amount of space for speakers. Your audio engineer can do simulations, but you're not quite sure on the porting. You can 3D-print cases with speakers in them overnight, put them in a metal enclosure that you ran on a CNC machine on-site, take them to an anechoic chamber -- all within walking distance of each other -- test them, give real-time feedback and then prototype again the next day. Something that would have taken four weeks takes four days. It helps you optimise your product. You can do that for cameras, RF or LTE signals, display, the typing experience -- it's something we're super proud of and the hub of our product-making.

Ongoing changes in the tech landscape are making IT planning and purchase decisions trickier than ever. As you evaluate your software and hardware future, this advice from Ed Bott can help.

Apple's and Microsoft's top tablets aim to replace your laptop, but can they? Here's how to find out.

Photo gallery: Since its debut in February 2013, Microsoft's Surface Pro has developed into an exemplary tablet/laptop-replacement device, and also inspired a thriving 'clone' market. Here are some of its key evolutionary stages.

Join Discussion for: Under the Surface at Microsoft's Future Decoded