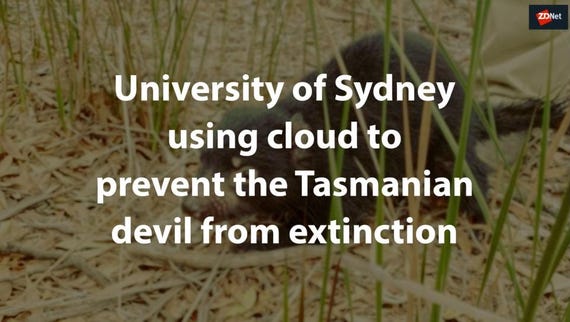 The University of Sydney (USyd) is hoping to save a range of threatened species in Australia, turning to the computing power of Amazon Web Services (AWS) to accelerate genomics research to prevent the Tasmanian devil from extinction.

Research manager for the Australasian Wildlife Genomics Group in the Faculty of Science at USyd Dr Carolyn Hogg has been focusing on genomics research for the cross-governmental Save the Tasmanian Devil Program.

Her mission is to help protect rare species, often unique to the country.

"Australia separated from the other continents more than 95 million years ago," she said. "More than 87% of our mammals, 93% of our reptiles, 94% of our frogs, and 45% of our birds can only be found here in Australia. They are vital for biodiversity and we have a responsibility to ensure their survival."

Must read: The Internet of Wild Things: How the IoT joined the battle against climate change

The Tasmanian devil is a rare marsupial, found only on the island state of Tasmania.

It is threatened not only due to man-made changes, such as from extreme climate events like the recent devastating bushfires, to habitat destruction, and vehicle collisions, but also by a contagious cancer that causes facial tumours.

The cancer has reduced its population by more than 80%.

By using the genome of Tasmanian devils, Hogg and her team can provide on-the-ground conservation managers with detailed scientific information and insights on how best to protect the species.

"Firstly, you spread all the pieces out -- taking up a huge amount of room -- then you find the edges. Slowly you start to slot bits together and you contract the space used by the other pieces.

"We're often working with more than a billion pieces of jigsaw and no guide."

What was previously a laborious and resource-intensive process is now sped up thanks to the processing capability of the cloud.

The team's work has accelerated since it began an AWS Cloud trial, which Hogg said enabled them not only to speed up research, but also to carefully, and more effectively, manage funding.

"AWS tools and computing power coupled with the RONIN interface -- a simple web application that allows anyone to launch complex compute resources -- help us to process, analyse, and categorise all of that data, to build the complete picture," she said.

The team is now starting a new project to assemble and annotate the genomes of some other threatened species.

"The recent Australian bushfires have been catastrophic for our wildlife, pushing even more species to the brink of extinction."

Hogg said the types of issues Tasmanian devils face are often very similar to those faced by other threatened species, such as the koala, orange-bellied parrot, or the woylie, which is an extremely rare marsupial.

"These range from low genetic diversity, to a high rate of infectious disease, and a fragmented landscape. As the devil population drops, genetic diversity also decreases. This leads to inbreeding, weaker immune systems, and a vicious cycle of more disease," she said.

USyd will be sharing the genome data on the AWS Public Dataset Program, which is an initiative aimed at giving researchers on-demand access to datasets to accelerate scientific discovery.

According to Hogg, the only way forward for large-scale genome projects is to "share ideas, data, techniques, and tools".

"Even with fragmented information, you can start to establish patterns. And often these patterns are true in other species. They can be used to draw certain conclusions or rule out other ideas," she said.

"In terms of scaling this up to benefit other species, the ultimate goal would be to create a universal genomic library and tools that other researchers and conservation managers can access in order to make science-based decisions."

Join Discussion for: University of Sydney using cloud to prevent...