Opinion: Presidential promises are not enough to disguise the lack of planning for the oil-backed coin.
Written by Charlie Osborne, Contributing Writer on Feb. 21, 2018 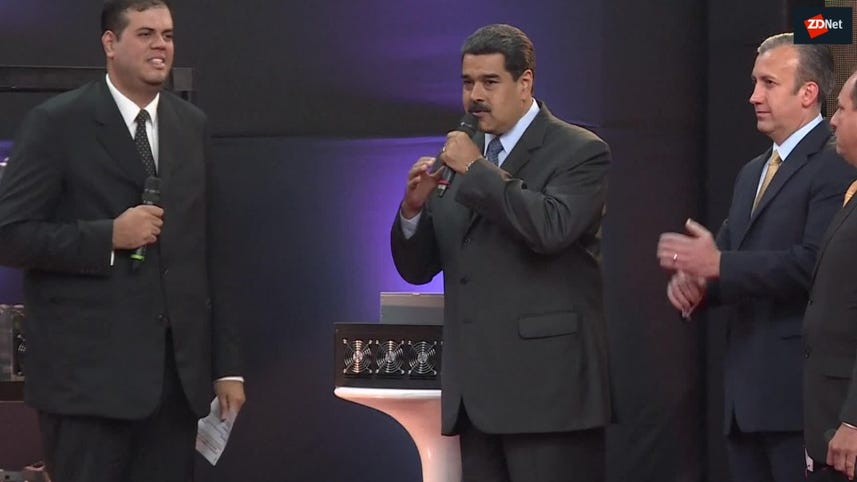 Despite concerns over the viability and backing of the Petro cryptocurrency, it appears that Venezuela's coin may have done well during a pre-sale event if Venezuelan President Nicolas Maduro is to be believed.

Maduro said on Tuesday that investors have displayed a real interest in the state cryptocurrency and on the first day of a pre-sale launched before the coin opens up to more public trading, the Petro raised a total of $735 million.

As reported by Reuters, Maduro said, "a cryptocurrency is being born that can take on Superman."

However, the government official gave no evidence to back the figure reportedly raised, nor were any investor identities revealed.

One does have to wonder whether the amount -- potentially far more than many would think the Petro could raise in 24 hours -- could potentially have been created in order to prompt true interest before the cryptocurrency goes on public sale next month.

Maduro first announced the cryptocurrency sale back in December.

The president hopes that the Petro, which is backed by the country's oil, gas, and precious metal reserves, will help lead the country out of an economic crisis which has spiraled out of control.

Rising debt, sanctions, wage stagnation, and a rapid increase in the cost of living has led economists to believe the country may be on the cusp of hyperinflation and complete economic collapse.

The Petro has been tipped as a way to circumvent US sanctions imposed on Venezuela due to allegations of corruption and shore up the country's finances. In January, Maduro asked other countries to lend their support and back the project, despite government colleagues rejecting the idea.

The president said that cryptocurrency would "advance [Venezuela] in issues of monetary sovereignty, to make financial transactions and overcome the financial blockade."

However, cryptocurrency and economic officials have long questioned the lack of evidence and public information which explains how the Petro would work in reality, and opposition government figures have called the Petro nothing more than an illegal debt issuance.

The only substantial information the president has offered is that the Petro will be limited to 100 million tokens, valued at approximately $6 billion, and will be backed by one barrel of crude oil per token.

Without a comprehensive plan for the cryptocurrency, the Petro brings to mind the countless cryptocurrency startups raising funding while investors receive nothing in return, companies which tout Blockchain-based services purely to ramp up share prices, and even Initial Coin Offering (ICO) exit scams.

While this does not mean the country would not honor and back the Petro by way of physical assets, there does appear to be the danger that investors would be pouring their funds into a cryptocurrency project which seems to have been very quickly announced and launched without due diligence.

In the same manner as traditional investments, not doing your research is the way to court high risk to your funds. It remains to be seen how the Petro's future will unfold -- assuming the cryptocurrency even has one.

Amazon
The Missing Cryptoqueen, book review: One coin to scam them all