Lidar system to be used to monitor intersection to provide warnings to connected vehicles.
Written by Chris Duckett, Contributor on Sept. 12, 2019 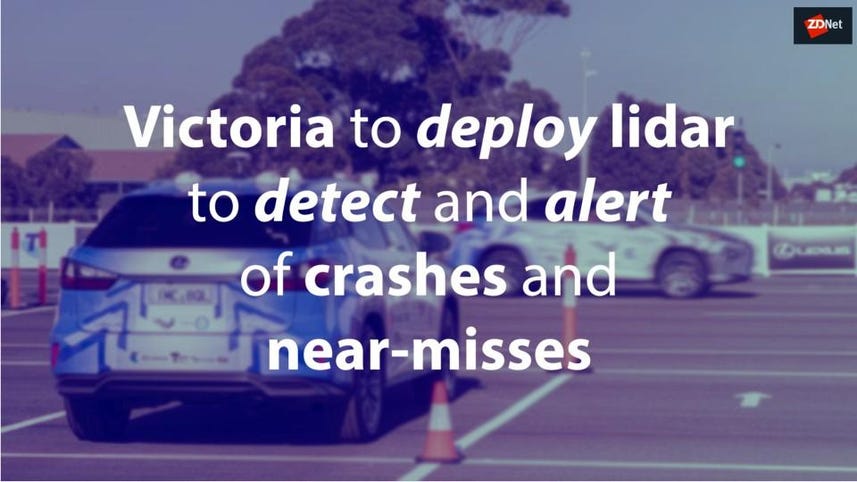 The Victorian government is set to trial lidar sensors at the intersection of Williamstown Road and Somerville Road in Yarraville.

The system will be able to alert connected cars in real-time of potential hazards, the government said.

"This is the first time lidar technology has been used in this way in Australia and will allow Road Safety Victoria to closely analyse crashes and near misses, and how they may have been caused, to make roads safer," the government said in a statement on Friday.

The trial is funded from the state's AU$9 million Connected and Automated Vehicle Trial Grants Program.

As long as you have a human, you don't need 5G

Also covered by the grant program is a trial between Telstra and Lexus to test a connected vehicle.

"There's going to be a driver in the car, for the time being, but that driver is going to be getting additional information using the cellular network," he said.

Examples of where the system could work would be alerting a driver that they need to slow down to 40 kilometres per hour as an emergency vehicle is nearby, or a car is stopped on the other side of a hill crest, or even alerting a pedestrian that a car is about to run a red light and not to step out.

The current testing is on Telstra's 4G network, and the latency is down to under 50 milliseconds, Eriksson said.

"With 50 milliseconds, if you're going 100 kilometres per hour, the car only goes one metre in 50 milliseconds. So the car is five metres long, it's within the cars length even," he said.

"As long as there's a human being involved, 4G is fine. It's really if you want to go down to use automated driving without any driver that you will need 5G."

Eriksson pointed to mines as an area where autonomous driving would first be deployed.

"5G will give you more capacity for all these cameras and things, for the latency and drivers, you don't really need it," he said.

The technology used in the trial would unlikely be retrofitted to existing vehicles, the CTO said, so the technology could take up to a decade to appear in vehicles as the entire Australian fleet is replaced.

Disclosure: Chris Duckett travelled to Telstra Vantage as a guest of Telstra.

Minister for Education Dan Tehan said it would be 'wonderful' if other states and territories followed Victoria's announcement to ban mobile phone use during school hours.

Public Transport Victoria found in breach of Privacy and Data Protection Act after a dataset containing a record of 1.8 billion myki events was provided without sufficient de-identification.

Police will use the 50 unmanned aerial drones to support operations, map crime scenes, and provide search and rescue support.