Samsung will strongly push 8K TVs this year in both QLED and MicroLED models to control over half of the shares in the next-generation resolution, its TV boss says.
Written by Cho Mu-Hyun, Contributing Writer on Feb. 10, 2019 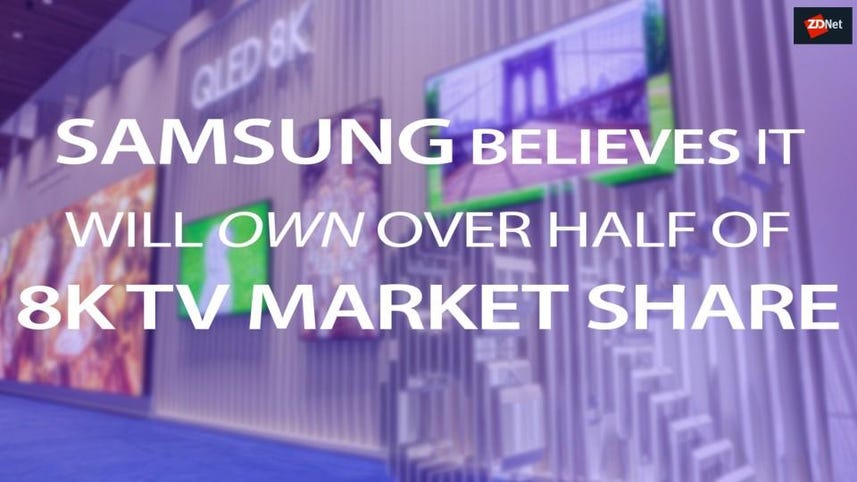 Samsung will account for over half of 8K TVs sold this year, its TV boss said, and will cement its leadership position in the premium TV sector.

8K TVs were launched in South Korea during November last year, and since then, over half of large-sized TVs sold have been 8K models, according to President of Samsung's Visual Display unit Jonghee Han.

Han expects the trend to continue this year, saying "over half of premium TVs with 8K sold this year will be those made by us."

Samsung first introduced 8K TVs at last year's CES, and has since been selling its QLED 8K model in South Korea, US, Russia, and Europe.

The company is now expanding sales to Latin America, Middle East, and Africa following the introduction of 2019-model QLED TVs at CES last month. Rivals LG, Sony, and various Chinese vendors also showed off their own 8K models at the same event.

The South Korean tech giant, which has been the largest vendor of TVs for 13 straight years, has been feeling the heat in recent years from its arch-rival and runner-up LG, as LG's OLED TVs have threatened to take market share in the highly lucrative premium TV sector -- TVs that are larger than 65-inches.

However, Samsung did well last year, securing strong gains in the third and fourth quarters last year over LG in the premium TV sector. LG meanwhile saw profits drop for its TV division due to high marketing costs and investments.

In the fourth quarter of 2018, amid profit drops across most businesses, Samsung's TV division was a rare positive note with increased profits thanks to strong sales of its QLED TVs.

Samsung's current strategy is to position QLED as a competitive product to OLED, while also pushing its MicroLED TVs as being "unsurpassable" among rivals, according to company insiders. MicroLED, like OLED, does not use a backlight but in contrast, uses inorganic materials and lasts longer due to it not having the risk of experiencing burn-in problems which OLED has been susceptible to.

The South Korean tech giant has improved yield rate and its deposition method when producing MicroLED TVs, and has already launched a 75-inch MicroLED TV this year. Making the LED smaller while keeping its integrity is difficult, but if achieved, can drastically bring the cost down in making MicroLED TVs.

LG meanwhile is not backing down from its OLED push, with its display unit investing billions into its factory in Guangzhou, China.

Han added that 5G will bring a wider variety of content to take advantage of 8K, with content development occurring faster than when 4K TVs were first released.

Samsung will call its foldable phone what? Apple wouldn't do that

The rumors are rife. The supposed name is, um, ripe for humor. Or even tragedy. Which leads us to wondering: What would Apple do?

Samsung's latest idea shows the Apocalypse is nigh

What better way to find the love of your life than to take a picture of what's inside your fridge?

Samsung's mobile business has posted an operating profit of 1.5 trillion won for the fourth quarter of 2018 -- its lowest since the Galaxy Note 7 battery debacle in 2016.

Samsung's 36CT93P DDI comes with its own USI-T 2.0 that boasts intra-panel data transfer speed of up to 4Gbps to 8K resolution TVs.