What happens when driverless car meets delivery robot at an intersection?

The latest 5G technology is being used in Estonia to find answers to tricky situations for self-driving vehicles.
Written by Kalev Aasmae on Jan. 24, 2019 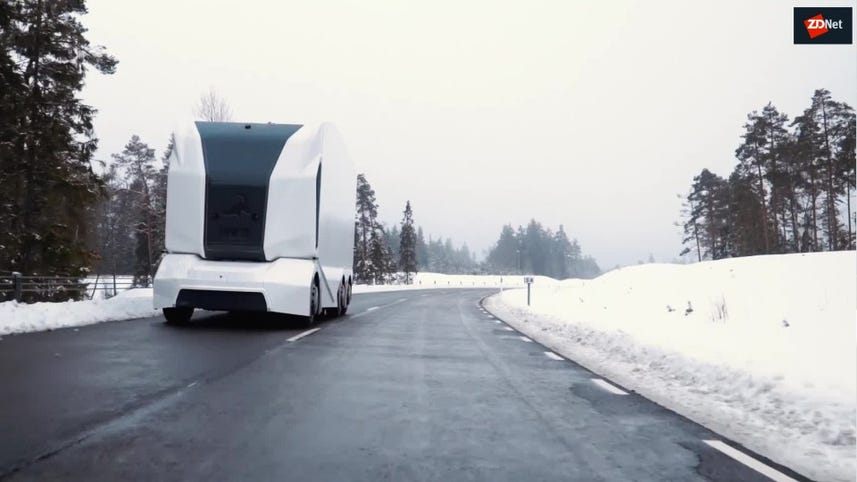 Just before Christmas last year, Telia and Ericsson opened a 5G pilot network on Tallinn University of Technology's campus. It's a permanent network, created for TalTech scientists and the local startup hub to test new applications that need next-generation technology.

Its first trial was to stream live 4K video from the Christmas market in Tallinn, which according to Telia Estonia, was the first live 4K broadcast in the region.

Although it will take some time until mobile end users in Estonia can start signing up for 5G, there are other areas where the technology is already being put to use.

One exciting project that's now powered by Telia's 5G network is ISEAuto, the first self-driving vehicle built in Estonia. ISEAuto is a last-mile autonomous shuttle, which is shorter and narrower than a Mini Cooper, although it is a meter higher than a Mini.

It is being tested on the TalTech self-driving car track. The vehicle has six spaces for passengers or luggage, with a 47kW main motor to give a cruising speed of 10kph to 20kph (6mph to 12mph).

Raivo Sell, a senior researcher at TalTech and one of the leading scientists behind the project, tells ZDNet that this month the team has already started the next stage of project, which involves building the second and more autonomous version of the car.

"The new version will be a street-legal version with optimized systems. It means ISEAuto v2 can perform pilot drives in urban environments," he says.

This next phase also involves the vehicle being tested and trialed in various countries.

"For example, we're applying for pilots in Tallinn, Estonia, and Helsinki, Finland, as well as some later pilots in Latvia. We're also starting to cooperate with Florida Polytechnic University to apply new testing and validation methods to our vehicle to make it safer and more reliable," explains Sell.

Although ISEAuto is soon going to have the opportunity to explore new tarmac paths in various places around the world, it doesn't mean it will be abandoning the smart-city environment of TalTech campus.

In addition to 5G and ISEAuto vehicles, the test area is equipped with intelligent road signs and is also being used by Starship Technologies' autonomous delivery robots, providing rare opportunities for scientists and entrepreneurs to test solutions to problems that could emerge in the near future in various traffic situations.

"New test cases are planned for late January and February to test V2V and V2I communication. The first test case will demonstrate ISEAuto and delivery robot communication, to agree on their driving behavior at intersections. This requires low latency communication, which is enabled by 5G," Sell says.

"The second case study involves real-time Lidar and camera-stream uploads to the cloud to perform real-time processing and cloud-based situation awareness analysis during the drive."

The ISEAuto project started in February 2017, when Väino Kaldoja, CEO of Silberauto, one of the biggest enterprises in the automotive field in the Baltics, came to the university and proposed some innovative projects for TalTech's 100th anniversary in 2018.

During the meeting with Raivo Sell, the idea of making a self-driving vehicle was agreed. The project started officially in June 2017 where both the company and the university invested 50 percent of the project cost.

"The project was very ambitious: to develop a fully operative self-driving car in one year," says Sell.

A team of students was put together to work on autonomous driving software, sensor technology, and electronics, while Silberauto engineers started to manufacture the vehicle body.

The project's main objectives were to develop relevant expertise, offer practical, state-of-art studies for students, and create a smart-city environment on the university campus. Those goals have been met, and now the one-off project might end up as something much bigger.

"As so far it's been a project-based initiative, we need to establish a long-term strategy. In cooperation with the smart-city concept on TalTech campus and our partner, the ISEAuto project will be reorganized to meet long-term objectives and business opportunities."

The international interest is certainly there. In addition to receiving invitations to several fairs and exhibitions in Baltic and Nordic countries, ISEAuto has already received quite a few cooperation proposals.

"One of our partners in this project is ABB Estonia, and the project has also gained the interest from ABB headquarters in Switzerland," says Sell.

"We're invited to be a partner in several EU H2020 projects and have also started collaborating with Japan and US universities and companies. We're just beginning a new partnership with Florida Polytechnic University and the International Transportation Innovation Center in the US."

So, when can we see the first ISEAuto driving independently on the public streets? According to Sell, quite soon.

"Tallinn will announce the tender for self-driving last-mile vehicle pilots where we will participate. If we succeed, our vehicle will be in traffic by the end of 2019."

Participants in the trial used their smartphones to call self-driving cars to pick them up and ride together.

How self-driving tractors, AI, and precision agriculture will save us from the impending food crisis

Go inside the race to feed the 9 billion people who will inhabit planet earth in 2050. See how John Deere and others are working to change the equation before it's too late.

5G mobile: Arriving not with a bang, but a whisper

High-speed 5G services could change everything, including the devices we use, but just not yet.

The inaugural trip focused on takeoff and landing, but there's more on the horizon.