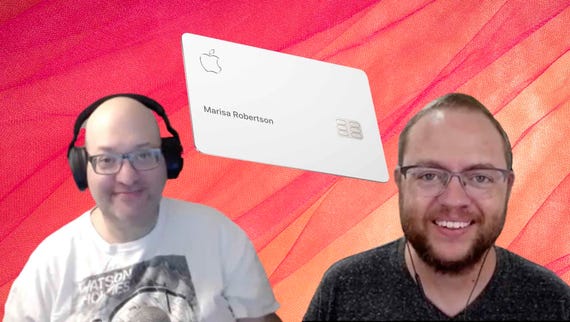 Apple Card one year later: Should you get one?
Watch Now

A year ago, Apple Card launched, and I was one of the very first subscribers.

I think nobody expected the Apple Card to be as hugely successful as it has been in such a short period. Part of this is because using your iPhone or your Apple Watch for contactless payments sounded just a bit too geeky a year ago. We had Apple Pay already, and if you have an Android, you could also use the Google and Samsung equivalents. While mobile technology neo-maxi zoomdweebies like myself and Jason Cipriani liked the idea, it wasn't considered a necessity. I was skeptical that anyone older than 35 would want one. 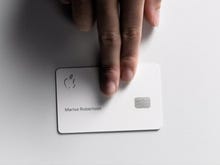 How we paid for goods in the before times

Frankly, when I first got an Apple Card, I had to do a lot of transactions with the titanium physical card because many businesses like restaurants did not have contactless payment capability. Now, that had its weird effects, because a lot of people had never seen a card like that before, with no credit card number on it. So they asked a lot of questions about it when you handed it over.

In fact, at one point early in the game, all my friends who were also Apple dorks with iPhones all got cards. When we would go out to dinner and split the bill, we would all hand our cards over at once, and we would laugh and call our group an obscene self-deprecating name. Do you remember "Glasshole"? Yeah, this was worse.

The honeymoon period only lasted a few months, because we all got whacked with this COVID-19 thing around March. Since then, nobody in their right mind wants to hand their physical card over to anyone or to touch a payment terminal. Everyone immediately wanted contactless. Greenbacks? Paper money is disgusting.

Why I love Apple Card in the age of coronavirus

Contactless payments are the main draw but Apple Pay already does this with any credit card you enroll, and I think the Google Card will be with us shortly. I would say contactless facilitates the adoption of Apple Card, but it is not the key differentiator.

The User Interface, at least within the iPhone itself, is exceptional. It is effortless to review the charges and how they are categorized, to be able to pay quickly, and how you can link it to your bank for a quick balance settlement. Additionally, to be able to select how much you want to pay towards the balance, whether it's the entire thing or just what is due, or whatever amount you want, with that circular dial control is neat.

Cashback is excellent. It's a no-nonsense perk; it's easy to understand; the benefits are clear. You get cash rewards deposited into Apple Cash every single day you use the card. I use my Apple Card for virtually everything; the only things I don't use it for are Amazon and Costco, which have their cards and rewards programs. All other transactions go through Apple Card because I am using it in place of paper currency -- groceries, takeout, fuel, regular expenses. The Apple Cash that accumulates from the daily rewards is easy to spend directly from Wallet and from sites and apps that use Apple Pay, and you can exfiltrate the funds to your bank in a single button click.

Secure, tokenized transactions that make the card virtually impossible to hack or skim is a huge feature. Even though it's not one you see, it's all on the Mastercard and Goldman Sachs back end. I haven't seen one fraud incident on my card yet, and I used to see them at least once a year when I was using Chase Sapphire regularly.

Customer Service is what puts this product on top. I've never had it this good, or as responsive, even when I paid $500 a year for the Amex Platinum, Chase Sapphire, or any of the high-end bank travel cards. Let me give you some examples.

First, you can either talk to a representative on the phone or interact with one using Messages, which is built into the Apple Card UX on Wallet.

A few months ago, I lost my physical Apple Card. I am not sure how it happened, but I noticed it was missing a few days after I last used it. If this were any other card, they would cancel the credit card number and I'd be screwed for a few days until I got a new one. And right now, as we know, the mail isn't exactly speedy.

These guys electronically issue the physical card a new virtual number, so if you have the card programmed into websites and stuff that charge against it, like recurring charges, nothing is affected. Only the physical card is a different one; your account stays the same. Ninety seconds on the phone with the rep, he authenticates me; he issues me a new card, has it mailed out. He even ended the call with Have a Wonderful Apple Day. I am not joking, he said this when I was in the car with my wife on speaker, and she started laughing hysterically. It was like Ned Flanders from The Simpsons was the card rep; that's how well trained these people are.

The other significant customer service feature where Apple Card stands out is resolving transaction disputes. I've had to initiate these a couple of times. I ordered some products from DHGate, worth about $50. The transaction was back in June; the products did not show up 60 days later. So I initiated a dispute right from the UX, it went right into Messages, and with a few texts with the rep, Apple refunded the money back. I saw it pop up in notifications right away. Simply amazing.

While I have a love affair with my Apple Card, there is a list of things I would like to see added and improved:

Card management UX to consolidate the payments and do card management if you have more than one Apple Card per family. I should be able to see what my wife is buying on her card and make sure she is paying the bill. You can't do that now. It isn't possible to issue "guest" cards under one master account; it's currently one Apple ID, one card, you are the applicant, and therefore, an adult. So children can't be assigned their spending cards. I would also want to be able to set spending limits on guest cards and review their charges. If my kid is in trouble, I should be able to turn off their allowance.

More rewards programs and multiple levels of card membership that are based on annual spending. The basic MasterCard benefits are pretty weak. There should be Gold, Platinum, Steve Jobs Club, whatever. More exclusive cool stuff and partnerships and more real-life tangible benefits beyond cashback would be great. Perhaps Apple could add services similar to Yelp or UberEats, Postmates, and other food delivery services, and more services that are integrated with partners. If life ever returns to normal, airline travel lounge partnerships, perhaps as a benefit for when you hit Gold and Platinum.

Better Web UX. Right now, what exists at card.apple.com is extremely basic. I would like to see more of the UX from iOS on the web, especially for Windows users.

An Android app. That it doesn't exist really grinds Jason Cipriani's gears. I'm not crazy about it either, but I don't see that happening.

Duh, iPad? I want the same implementation of Wallet on the iPad as I do on the iPhone, and have the Apple Card primary UX so I can do the same basic stuff as the iPhone but use the nice big iPad screen. Yes, there is a version of it on iPad, buried within the Settings menu, but it doesn't have all of the same features, such as the monthly activity charts. And while we are at it, Apple can use that fancy Catalyst stuff it has for Big Sur and port it to the Mac.

Apple Pay needs to be able to pay anyone and not just Apple platform users. I should be able to debit from Apple Cash or cash advance payment/micropayment with Apple Card. The fact that I have to play the what kind of electronic funny money do you prefer game with people I owe money to is ridiculous, I should never have to say, uh, you do Apple? No? Do you Venmo? Cash App? Zelle? That's stupid.

Join Discussion for: Why I love my Apple Card in the age of COVID