It will build on tests that Wisk has been conducting since 2017.
Written by Aimee Chanthadavong on Feb. 4, 2020 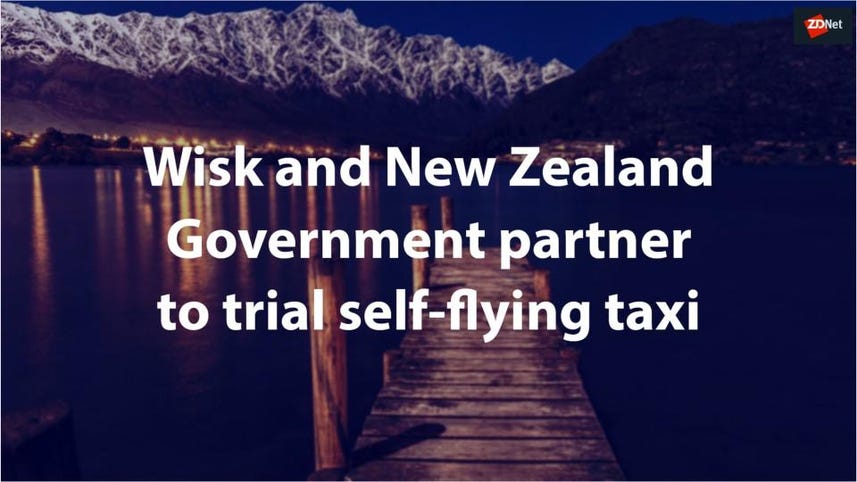 Urban air mobility company Wisk has signed a memorandum of understanding with the New Zealand Government to begin a passenger transport trial across Canterbury in New Zealand.

The trial will use Wisk's electric self-flying taxi, Cora, which has been in testing in the Canterbury region since 2017.

"We are delighted to now have a signed agreement with the New Zealand government, which will propel Cora's entry to the air taxi market. We see this agreement as a sign of confidence in our product and abilities to develop and deliver a safe and reliable air taxi service, starting in New Zealand," Wisk CEO Gary Gysin said.

The trial is part of the New Zealand government's NZ$3 million commitment made in October last year to establish an airspace integration trials program to test and develop unmanned aircraft.

At the time, Zephyr Airworks was named as the first industry partner to participate in the program.

Zephyr Airworks was renamed to Wisk at the end of last year when a joint venture between Kitty Hawk and Boeing was established.

"The government sees great potential in the development of an innovative unmanned aircraft sector in New Zealand and we are in a prime position to work with globally-leading companies here to safely test and go-to-market," Research, Science and Innovation Minister Megan Woods said.

"As well as the economic and social benefits the growth of this industry offers, we also share Wisk's vision of a greener, emission-free way for Kiwis and visitors to New Zealand to get around. Enabling the emergence of an entirely electric air taxi service is a natural fit with New Zealand's zero carbon goal by 2050."

The specific details regarding the trial parameters, timeframes, and the proposed routes are still being developed.

"We needed a place that was just as bold and dynamic in order to bring Cora to the commercial market," the company said in a blog post. "A place that could be more than just a willing airfield. That had a world class reputation in certification and regulation. And a government and society with an eye to the horizon."